“A Terrible Beauty is Born”: The Easter Rising 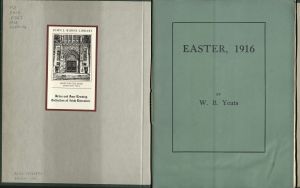 The Easter Rising, the armed rebellion pitting the nationalist Irish Volunteers against the British military in the city streets of Dublin from 24 April – 30 April 1916, can rarely be discussed in public discourse without reference to W.B. Yeats’s famous poem Easter, 1916.  Its refrain—”A terrible beauty is born”—has come to signify the deep ambivalence accompanying gains purchased through violence and bloodshed.  Yeats’s friend and amanuensis Ezra Pound looked forward to “chaffing Yeats about the Dublin Republic.  He don’t like republics.  He likes queens, preferably dead ones, but he has been out of town for three days and I shall assume that he was at Stephen’s Green” (Pound to Quinn, 1 May 1916, NYPL).  But of course, he wasn’t.  Although the poem and the historic event have been fused into one cultural moment, W.B. Yeats was not present for the uprising.  When he received the news, the poet was in Gloucestershire sitting for a portrait by William Rothenstein.  Yeats at fifty had distanced himself from the revolutionary energies of his youth.  A much needed pension from the British government, recent experiments with Japanese Noh drama, the difficulties and failures of the national theater, the struggle over the creation of a modern art gallery in Dublin, and even rumours of knighthood (although he would decline) demonstrated the gap between Yeats and those advanced nationalists who would star in Dublin’s “casual comedy.” 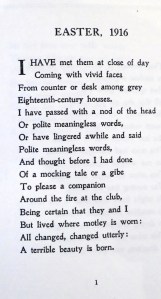 Only days before Patrick Pearse read the Proclamation of the Irish Republic before the General Post Office, Lady Cunard, heiress to a shipping magnate’s fortunes, organized a staging of Yeats’s At the Hawk’s Well for wartime charities under the patronage of Queen Alexandra, who was present.  In many ways Yeats’s own position could not be further from those who pulled triggers, concocted bombs, dressed wounds, and cooked meals under the Tricolour and the Plow and Stars.  Yet in curious ways, Yeats experienced the Rising like many Dubliners, searching for information and building a narrative of the events.  A steady stream of letters and news reports with their mixture of rumor, hearsay, and speculation reached Yeats, and as the leaders of the Rising one-by-one resigned their lives in the Kilmainham courtyard, the shifting narrative of the events and general disgust at Dublin’s destruction began to coalesce into sympathy, hagiography, and a new chapter in Ireland’s mythological struggle for freedom. The importance of Easter, 1916 can be found in its willingness to synthesize and interrogate this tectonic shift in sentiment, figuring a character like John McBride (estranged husband of Maude Gonne) as simultaneously a “vainglorious lout” and an indelible figure of the “terrible beauty” created by the event. 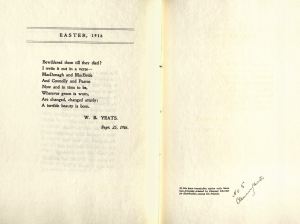 Initially, Yeats intended the poem’s striking personal and political content for a small audience.  The poem was privately published by Clement Shorter in a print run of only twenty-five.  Shorter, the husband of nationalist poet Dora Sigerson, was editor of The Illustrated London News and a friend of Yeats.  The Burns Library owns one of these twenty-five initial printings that brought Yeats’s private thoughts on the Easter Rising to his closest friends and supporters before the poem entered into public circulation four years later when it appeared in both The New Statesman and The Dial as well as in the collection Michael Robartes and the Dancer (Cuala, 1921).  This early issue of the poem offers a rare look into the poem’s development from private thought to public utterance and allows the reader to trace the changes made by Yeats.

If you’d like to look at this early issue of Easter, 1916, then visit the Burns Library Reading Room. This copy of Easter, 1916 is part of the Brian and June Leeming Collection of Irish Literature.  Natives of New Zealand who settled in Brookline, MA, in 1989 the Leemings’ donated their collection of W. B. Yeats first and fine press editions to the Burns Library.  These books are cataloged and searchable via the BC University Libraries catalog, Holmes.  Using the advanced search form (http://bclib.bc.edu/advanced–search), type in “Leeming” and choose the search type “Local Collection Name” from the drop-down menu and and then click on “Search.”  These search results will show you catalog records for all the wonderful Yeats editions available at the Burns Library.  In addition, the Boston College University Libraries has made available online an early Yeats play owned by the Burns Library –   Love and Death (also see bc.edu/loveanddeath).  In addition, the Yeats volumes In the Seven Woods (1903) and Wind among the Reeds  (1899) are available online as well through BC University Libraries.  If you have further questions, then please contact the Burns Library Reading Room at 617-552-4861 or burnsref@bc.edu

1 Response to “A Terrible Beauty is Born”: The Easter Rising