Exhibitions Update:Emigrant Letters, One Student’s Analysis of a Poem

Posted on May 21, 2012 by John J. Burns Library of Rare Books and Special Collections at Boston College

The exhibit “Precious Poems in Precious Packaging,” recently on display in O’Neill Library, featured a striking and diverse array of Irish poems printed and bound by the Traffic Street Press. Selected from the John J. Burns Library’s collection of printed Irish materials, the beautifully bound poems reflect the remarkable craftsmanship and artistic flair of Traffic Street founder Paulette Myers-Rich. Intrigued by each poem’s visually captivating cover, I was compelled to engage with the printed text and explore the poems themselves. In doing so, I discovered Irish poems that were as nuanced and expressive as the boards that bound them. 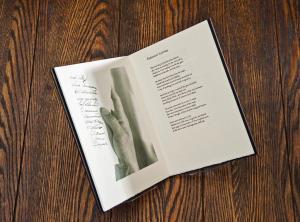 Of particular interest to me was a poem by distinguished Irish poet Eavan Boland entitled “Emigrant Letters.” In the poem, Boland discusses the critical importance of language, printed words, and, indeed, letters to the Irish emigrant. The first stanza introduces the voice of the speaker, a traveler returning to her Irish home. While boarding her flight, she hears an Irish voice behind her that sounds as if “its owner must have been away for years” (Boland). To emphasize the linguistic, accentual gap between the speaker and the second voice, Boland uses contrasting metrical structures. The first stanza, describing the poem’s speaker—in all probability, Boland herself—is in perfect iambic pentameter. Note the characteristic syllabic pattern of “ta-tum” in the opening line: “that morning in Detroit at the airport” (Boland). When the poem’s focus shifts to the second voice in the following stanza, however, the meter undergoes a subtle change—retaining the iambic pentameter from the first and fourth lines but fragmenting in the middle two: “vowels half-sounds and syllables” (Boland). Here, the musical, iambic lilting of the speaker’s Irish accent is juxtaposed against the jumbled, Americanized dialect of the second voice—one that betrays only a trace of its Irish origin. Yet, as Boland writes, it was “a way of speaking you could tell a region by” (Boland). In this way, Boland establishes language’s power to simultaneously separate and unify the native and emigrant Irish communities. Spoken word becomes, for her, both a means of distinction and a marker of common heritage.

In the remaining stanzas, Boland continues to develop this theme through the use of natural imagery. Reflecting on the exchange of emigrant letters between the Irish homeland and New England, Boland describes, “How their readers stood in cold kitchens” and yet were greeted with images of “the stitchwort of late spring, the mosquitos, [and] the unheard of heat” (Boland). In this line, the fauna and seasonal swelter of New England leap off the page of each emigrant letter. Attempting to store their letters away in cupboards and cabinets, the Irish readers find that the “[drawers] never/…/close properly: informed as [they] are/ by those distant seasons” (Boland). Here, the letters provide an unbreakable link between the Irish homeland and the new American homestead. So great and vital is this connection that the drawer will not and cannot “close properly” (Boland); when the heat of an American summer meets the chill of an Irish kitchen, the wood of the drawer figuratively “warps” (Boland). Through the linguistic channel of emigrant letters, the lives and experiences of far-off loved ones achieve a tangible, physical presence in the lives of the readers—uniting Irish men and woman the world over.
Bursting with lavish imagery and metrical complexity, Boland’s Emigrant Letters represents only a fraction of the Traffic Street Press Irish Poetry series collection in the Boston College Libraries. See the books at the John J. Burns Library, witness the beauty and charm of these precious poems, and begin your own engagement with the text!

3 Responses to Exhibitions Update:Emigrant Letters, One Student’s Analysis of a Poem