Posted on December 3, 2012 by burnslibrary

The bulk of the Thomas P. O’Neill, Jr. Congressional Papers are stored in one physical location in fairly uniform boxes. This is what they look like in the Burns Library stacks.

A visit to Brighton Beach in New York City, to Brookline in Boston, or to Mayfield Heights near Cleveland reveals the preponderance of Russian immigrants in the United States. Fleeing persecution in the Soviet Union, Russian Jews were occasionally granted permission to emigrate. Emigration was only allowed in cases where those requesting to leave were doing so to be reunited with their family members. However, this was not always sufficient. In many instances, when an individual had previously worked in an occupation in which he/she had access to state secrets (i.e. intelligence, arms industries,  energy sector, etc.), that person was denied permission to leave the country. Those who were denied exit were called        “refuseniks.” First-hand accounts of the plight of Soviet Jewry can be found in the Thomas P.  O’Neill, Jr. Congressional Papers. O’Neill’s position as Speaker of the House allowed him great influence in matters of foreign policy, particularly with regard to U.S.-Soviet relations. At the same time, his constituency in Boston’s major Jewish communities was reason for his concern over the livelihood of Jewish persons in the United States and throughout the world. In this post, I highlight a few of many valuable pieces in the Burns Library’s vast collection: two correspondences, one press release, and one legislative draft. 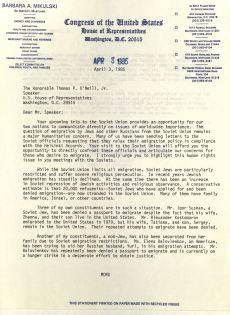 A letter from then Congresswoman (now Senator) from Maryland Barbara Mikulski reveals her and her constituents’ concerns for certain refuseniks not being granted allowance to emigrate from the Soviet Union. In this letter, Milkulski urges O’Neill to mention her constituents’ concerns in his upcoming visit to the Soviet Union.   Mikulski, like many other congressmen and congresswomen, wrote to O’Neill appealing on behalf of their constituents and of their own convictions for his increased attention to the situation of Soviet Jews. Legislators, however, were not alone in requesting help.

Sergei Petrov’s status as a “refusenik” became a source of tension between Soviet and American authorities. In 1981, Petrov married Virginia Hunt Johnson, an American. By 1985, Russia was still repeatedly refusing his request for emigration, and throughout these years he had been unable to see his American wife. 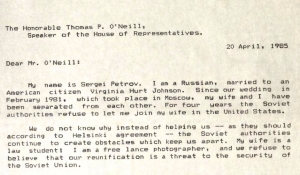 The O’Neill Congressional Papers also contain news articles documenting Petrov’s many days of fasting in protest of the Soviet Union’s continued decision not to let him leave. In this particular letter, Petrov writes to O’Neill expressing his desire to meet the House Speaker during his upcoming visit to Moscow. He also insists that O’Neill mention his case in discussions with Soviet politicians. Petrov states, “[My wife and I] hope that during your meetings with senior Soviet officials you will raise the issue of the divided families and insist on a proper explanation why such a tiny group of people is deprived of the elementary right to have a family.” 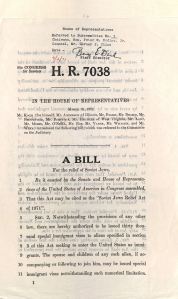 The written appeals to O’Neill that can be found in his papers are many. Ranging from his constituents in Boston to fellow legislators to community activists to Soviet officials and even to citizens of the Soviet Union, the Jewish Diaspora’s concern over the ability for Jewish persons to emigrate is evident from the many handwritten and typed letters from all over the world. And O’Neill’s similar anxieties over the situation can also be found. A co-sponsor of a 1970s Soviet Jewry Relief Bill, O’Neill was a strong supporter of Soviet Jewish immigration to the United States. The bill provided that American visas be offered to all Jews residing in the Soviet Union. Multiple copies of the bill can be found in the archives; the one shown in the blog post is one of many drafts of this legislation.

O’Neill had been a serious advocate of this bill, despite the bill’s original sponsor abandoning it.  The accompanying document, from 1972, is a notice to the press regarding a news conference on the upcoming vote on the Soviet Jewry resolution. Accompanying O’Neill and two of the other bill sponsors at the news conference appeared to have been a Russian American woman. The woman’s sister, a Soviet citizen, was arrested and sentenced to two years in prison for possession of “Hebrew poems and literature about Israel.” Whilst in prison, her sister’s health began to deteriorate, and her need for American medical care was much-needed. “The resolution… calls on President Nixon to take specific steps to aid Soviet Jews and to allow their free emigration,” explains O’Neill in the notice, using the example of his guest to clarify the necessity for the bill’s passage.

The Cold War, even in its later years, was the cause of great trepidation around the world, especially in the United States and in the Soviet Union. Ideological divisions, military endeavors, and basic economic principles were the focus of global debate as the Soviet Union and the United States engaged in passive aggression throughout the second half of the 20th century. Among the concerns for U.S. politicians and citizens was the treatment of minorities in the Soviet Union, and one of these minority groups was Soviet Jews. For Jewish persons, life in the Soviet Union was difficult. Many were not permitted employment in certain sectors of the labor force and were not allowed to join the Communist Party (and thereby reap the material rewards of being a party member). Furthermore, practice of the Jewish religion was disallowed in the country. Aside from the anti-Semitic institutional design of the Soviet Union, there was also much dislike of and distrust towards Jewish people.

It is only natural that so many attempted to flee from these oppressive conditions. Americans, particularly American Jews, were sympathetic to the plight of fellow Jews from the Soviet states and acted forcefully to ensure the safe and free passage of Soviet Jewry into the United States. This feeling translated into political action among U.S. legislators. O’Neill was one such congressman. Though not Jewish himself, he empathized with the Jewish nation and fought for their rights and freedoms. The Thomas P. O’Neill, Jr.  Congressional Papers are an excellent source of materials for anyone interested in learning about Congressman O’Neill, his role in U.S.-Soviet relations, and his defense of Soviet Jewish immigration into the United States.  To learn more about the O’Neill Congressional Papers, take a look at this finding aid.   For more information about doing research at the Burns Library, take a look at this research guide or contact us at 617-552-4861 or burnsref@bc.edu.