Cataloger’s Corner: A Jesuit Legal Entanglement from the Far Reaches of the Spanish Empire

The Burns Library Cataloging Department recently processed a remarkable addition to our rare books collection. Bound in limp vellum, the folio-sized volume contains a set of 17th-century legal documents produced during a lengthy conflict over the payment of ecclesiastical tithes in the colonies of Spain. Broadly speaking, the conflict and ensuing lawsuits grew out of a discord between the Catholic religious orders and the diocesan clergy. The latter group, along with agents of the Spanish Crown, sought with increasing fervor to collect tithes from the various orders who were operating abroad in the colonies. The feud eventually came to a head in New Spain, where the Jesuits, one of the orders claiming exemption from the tithe, were operating a number of particularly profitable estates and schools.

While it may sound like an esoteric matter of bureaucratic Church history, tithing was actually a critical financial issue in the debt-ridden Spanish Empire. The annual payments to the Church — usually in the form of livestock or crops — were collected on its behalf by the government. The livestock and other commodities were then sold off, the proceeds providing much-needed support for local bishops and fledgling congregations. At the same time, a portion of those proceeds — two-ninths, to be exact — went directly to the Crown itself, helping to fund cash-strapped colonial governments and costly military outlays. 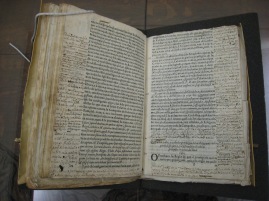 This document, dating from 1667, appears to originate from one of the Jesuit appeals of the 1665 ruling. The margins are extensively annotated throughout with commentary, perhaps from a Jesuit lawyer, legal adviser, or procurator.

In this context, the Jesuits’ exemption from payment provided them with a significant financial advantage, allowing their various secular ventures to flourish, essentially without the burden of taxation. This arrangement effectively decreased potential revenues for the Church and the Crown, thus increasing the financial burden on local bishops and municipal budgets. As the Jesuits’ schools and estates grew more profitable, their exemption from the tithe became increasingly conspicuous. Facing their own financial pressures from the Crown, the royal councils in the colonies, along with various bishops, finally sued the Jesuits, Dominicans, Augustinians, and Mercedarians in order to establish a right to shares of those orders’ incomes. After a definitive ruling in 1655, all of the parties accepted their obligation to pay, except for the Jesuits, whose appeals stretched for decades.  It was during the course of those appeals that these documents were created.

One can find extensively detailed legal arguments throughout the pages of this collection, along with compilations of historically-relevant proclamations, decrees, and judgments; in-depth summaries of related litigation, hand-written marginalia (including editing notes that appear to suggest the formulation of a legal strategy, possibly by Jesuit lawyers), three published Jesuit treatises on tithing, and detailed, contemporary descriptions of the intertwined, symbiotic workings of church and state during the height of the Spanish Empire.

Signature of Mariana of Austria, widow of Phillip IV, and Queen Regent of Spain.

Equally worthy of mention is the book’s fascinating historical provenance. Three of the documents, stamped with the seal of the Spanish Crown, appear to have been official copies used during the course of the litigation itself, and contain the signatures of numerous parties to the lawsuits, including Jesuit procurator Juan Camacho de Córdoba and many others. Most prominently of all, the Queen Regent of Spain herself, Mariana of Austria, signed one of the documents containing a ruling of the court in a florid script that reads, “Yo La Reyna” (I, the Queen).

The election of Pope Francis has brought with it a renewed curiosity about Jesuit history, and the Burns Library is particularly well-positioned to support new scholarly efforts that may emerge as a result. Our outstanding collection of Jesuitica — one of the finest in North America — includes thousands of rare books and archival materials, and documents the contributions of the Society of Jesus to a broad range of disciplines, including science, mathematics, philosophy, history, travel, and theology, among others. For more information on the collection, please search our online catalog, consult Burns Libguide, or contact the Burns Library Reference staff at 617-552-4861 or burns.reference@bc.edu.

1 Response to Cataloger’s Corner: A Jesuit Legal Entanglement from the Far Reaches of the Spanish Empire