Posted on February 3, 2014 by burnslibrary

Portrait of the Marquis of Pombal, owned by the Museu Nacional de Soares dos Reis.

In 1759, the Prime Minister of Portugal, Sebastião José de Carvalho e Melo (later the Marquis of Pombal), convinced his king to expel the Jesuits. Carvalho justified his actions through continued attacks on the Jesuits in a string of French publications, printed in Paris.

Meanwhile, half a world away on the Caribbean island of Martinique, a French Jesuit named Père Antoine La Valette faced mounting debts, his investments lost in the ongoing Seven Years War. As La Valette’s financial struggles became an increasingly public problem, a desperate struggle ensued over the reputation the Jesuit Order.

Carvalho found a ready audience for his invective in France because he attacked the propriety of one of the Jesuits’ most prized memories, their missionary successes among the Guaraní of Paraguay. Although Carvalho’s accusations were being published in French no later than 1758, the French literati had long been interested in these Paraguayan missions. Leaders of the Enlightenment were especially fascinated by what the reports of these missions might reveal about primitive life and utopian societies.

Lodovico Antonio Muratori’s 1743 Italian account of the missions had been translated into French in 1754 as the Relation des missions du Paraguai. Its success ensured that it continued in print for a full decade, and in 1756, the Jesuit priest and historian Pierre-François-Xavier de Charlevoix published his own monumental six-volume Histoire du Paraguay.

In subsequent editions of the Relation des missions du Paraguai, the French translator claimed in the introduction that neither he nor the author were connected to the Jesuit Order. Thus professing disinterest on behalf of himself and the author, the translator offered the text as “a proof in favour of the Missionaries” against those claims “industriously and maliciously spread about the world by their enemies.” The translator may well have considered Carvalho to rank foremost among these enemies of the Paraguay missions.

But the importance of the Paraguay missions also attracted no less than the keen wit of France’s foremost writer and philosopher, François-Marie Arouet, better known by his pen name, Voltaire. Voltaire’s bête noir had long been the editor of the periodical Journal de Trévoux, the Jesuit Guillaume-François Berthier. In 1759, Voltaire published a scathing satire of Berthier, the Relation de la maladie, de la confession, de la mort et de l’apparition du jésuite Bertier: “An Account of the Sickness, Confession, Death, and Apparition of the Jesuit Berthier.” 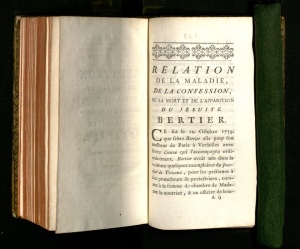 Voltaire’s satire: “An Account of the Sickness, Confession, Death, and Apparition of the Jesuit Berthier.” 07-000039520 Jesuitica.

In this fanciful account of Berthier’s death (Berthier did not actually die until 1782), Voltaire imagined an ailing Berthier making his final confession to the first confessor who could be found. The priest who comes maneuvers Berthier into confessing that his attacks upon Voltaire and his circle had been little more than hypocrisy and slander. Berthier then discovers that his confessor is none other than the anonymous editor of the Nouvelles ecclesiastiques, the same underground newspaper that celebrated Carvalho’s anti-Jesuit propaganda about the Paraguay missions. Berthier slips into a heated rage: “’Give me back my confession, you scoundrel!’ said Berthier. ‘Give me back my confession right now!’”

Voltaire further hones his attack on the Jesuits in the closing pages, as he has the ghost of Berthier narrate his journey through hell and into purgatory. Berthier confronts each of the deadly sins in turn, and there among them: “Avarice was in a corner, weighing the crop of Paraguay against its gold. ‘Is it you, madam, to whom our credit is due?’ ‘No, reverend father, I condemn but a few of your procurers.’”

This, then, was the intellectual and political climate in which La Vallete’s business ventures as procurer for the French missions in the Caribbean became public: governments and economies experiencing the crisis of a world at war, the sudden suppression of the Jesuit Order throughout the Portuguese Empire, and a fight among the French literati that ultimately called into question the probity of Jesuit missionaries.

Ongoing litigation revealed that La Vallete had in fact accumulated over 6 million livres of debt. Enemies of the Jesuits pressed to bring the case before the highest courts. In 1761, a Paris court determined to hold the Order accountable for La Vallete’s actions, and in 1762 they authorized the distraint of all Jesuit properties, goods, and accounts until his debts had been paid. Once their properties had been sequestered, the Jesuits lacked the means with which to raise further funds, and one by one, the French provincial governments ordered the Jesuit houses to close, concluding with a royal edict suppressing the Order throughout the French Empire in 1764. La Valette’s actions seemed to confirm Carvalho’s accusations, providing grounds for what would become the worldwide suppression of the Jesuit Order from 1773 through 1814.

2014 marks the 200th anniversary of the Jesuit Restoration. The Burns Library maintains an extensive collection of materials documenting this critical moment in history. This post continues a series of posts on the Jesuit Suppression: Bold Moves in Tumultuous Times and Memories of Malagrida.

1 Response to The Jesuit Ordeal II: Satire and Suppression