Cooks and Menus: A Closer Look at Fannie Farmer

The exhibit “Are You Being Served? Historical Menus from the Archives” recently opened at the John J. Burns Library. Often when selecting items for an exhibit, the curators find themselves spoiled for choice: this time we not only had too many spectacular menus from which to choose, but also too many intriguing personalities to fit into the exhibit text!

Fannie Farmer (left) with Martha Hayes Ludden, one of her students at the Boston Cooking School.
© Bettmann/Corbis

Fannie Farmer is one of the people featured in our exhibit who deserves a closer look. She trained a generation of cooks in the Boston area and had an even longer-lasting influence on American cooking (and menus) with her bestselling eponymous cookbook. Born in Boston in 1857, Fannie Farmer was raised in Medford by a housewife and a printer. She was intelligent and ambitious and planned to go on to college, but her plans were derailed by a bout of what was probably polio when she was still in high school. She was bedridden for several years, and although she later recovered enough to walk with a limp, her dreams of higher education had to be put aside. She worked as a nanny and then in 1888 entered the Boston Cooking School. The Boston Cooking School had been established by the Women’s Education Association of Boston in 1879 to promote a scientific approach to cooking and nutrition. Mary Johnson Bailey Lincoln served as the first principal, followed by Ida Maynard and Carrie Dearborn. Dearborn was so impressed by Farmer’s work that she made Farmer assistant principal, and when Dearborn resigned in 1893, Farmer inherited her job. 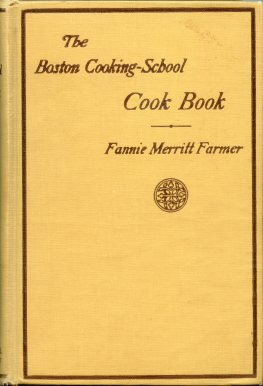 The rest, as they say, is history. One of Farmer’s first tasks was to revise the school’s text book. The original, Mrs. Lincoln’s Boston Cook Book, had been written by Mary Johnson Bailey Lincoln in 1884 and was published merely as a convenience for the School’s students. Farmer had grander visions for her revision and approached the respectable publishing company of Little, Brown with her manuscript. They were nervous about the venture and agreed to distribute the book if Farmer covered the production costs herself. She agreed, and in 1896 The Boston Cooking-School Cook Book was published. Her gamble paid off: the book was a great success, with over 360,000 copies sold by the time of Farmer’s death in 1915. Nowadays it is more well-known as The Fannie Farmer Cookbook, still in print and an authoritative and easy-to-use reference for uncertain new cooks. 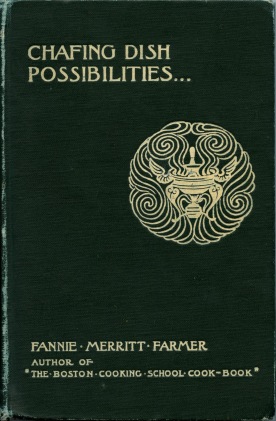 Farmer’s emphasis on exact measurements took the guesswork out of cooking, while her flair for novelty kept her readers interested and emphasized her conviction that cooking should be enjoyable. She published five more books: Chafing Dish Possibilities (1898); Food and Cookery for the Sick and Convalescent (1904); What to Have for Dinner (1905); Catering for Special Occasions (1911); and A New Book of Cookery (1912). As a onetime invalid herself, she considered Food and Cookery for the Sick and Convalescent her best work. She offered a course on the subject in her own cooking school and even lectured to students at Harvard Medical School. From a young adulthood marred by sickness, she went on to a successful career in the field of scientific cookery, and provided many cooks in the Boston area and beyond with precise and entertaining guidance.