On September 21, 1761, the Italian Jesuit Gabriel Malagrida was led into the Rossio Square in downtown Lisbon, but Malagrida took little notice of the elegant plaza. The seventy-three year-old stepped out into the Rossio wearing the sanbenito, the smock and dunce cap that marked him as a convict of the Inquisition. Before a crowd of curious onlookers, his charges would soon be read and he would be led to the stake, where he would be strangled and his body burned. At the end of the day, Malagrida’s ashes would be swept up and dumped without ceremony into the Tagus River, perhaps thence to be washed into the sea.

The Portuguese Prime Minister, Sebastião José de Carvalho e Melo, Marquis of Pombal may well have thought himself rid of the troublesome priest, a man who had used the pulpit to censure the state and criticize recovery efforts after the 1755 Lisbon earthquake, and a man who had for too long held sway over the royal court. Pombal’s efforts to reduce Malagrida’s influence had been prodigious. He dedicated a full chapter of his memoires: “The Reasons for the Hatred of Carvalho [as Pombal called himself] against Malagrida.”

Following an assassination attempt against King Joseph I in 1758, Pombal had implicated the family of Joseph’s mistress, the Marchioness Teresa Leonor Tavorá. He claimed that Malagrida, as the Tavorá family’s confessor, was necessarily a party to the family’s crimes. But three years of trials and mistrials had undermined the credibility of these charges. In the end, Pombal resorted to using his own brother to adjudicate the process and force a favorable verdict.

Pombal’s brother, Nuno Alvarès Pereira de Melo, presided over Malagrida’s execution on that fall day in 1761, and that night he hosted a celebratory banquet in a Dominican convent. But Malagrida’s trial was far from over. Pombal had used Malagrida’s purported involvement in the conspiracy to compel King Joseph to dissolve the Jesuit Order throughout Portuguese domains. Their expulsion removed a powerful political faction and enriched the royal treasury through the seizure of their properties. Long after Malagrida’s remains had been scattered into the Tagus, the defrocked and discredited priest continued to surface as a symbol for this first act of the Jesuit Suppression.

The Execution of Gabriel Malagrida (1761).

In Pombal’s memoires, published in 1784, he recalled the day of Malagrida’s execution as “one of the most celebrated days which our history has preserved for posterity.” On that day of execution, however, Malagrida stands strangely silent in Pombal’s account. Pombal recalled how he had turned the Rossio into an amphitheater ringed with soldiers, the nobility, ministers, the court, and a crowd of commoners. Malagrida took center stage, “the pallor of death already on his face.” But his charges read, he leaves no final words. It is the Benedictines who intervene and beg that Malagrida be given the mercy of death by garrote before being burned at the stake: “And so the career of Gabriel Malagrida, the Italian Jesuit, came to its miserable end.” 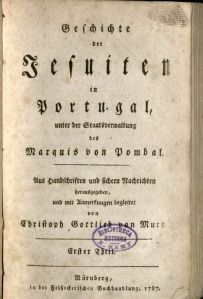 But Pombal’s account did not go uncontested. Even in the years of their suppression, many ex-Jesuits were connected to powerful families, others attained positions of influence through their own merits, and throughout Europe the suppressed Order attracted allies both inside and outside the Church for innumerable reasons. Among their supporters was a Protestant living in the Free Imperial City of Nuremburg: the scholar, historian, and magistrate Christoph Gottlieb von Murr.

In 1787, von Murr published his own account of Malagrida’s death, part of his revisionary History of the Jesuits in Portugal, under the Administration of the Marquis of Pombal. To help memorialize the recently deceased Pombal as a “despotic” and “cunning minister,” von Murr sought to resuscitate Malagrida’s memory. His trial, von Murr snipes, was only a “so-called auto-de-fè.” Pombal’s trumped-up charges were a “brash work of lies.” And although Pombal’s ploy succeeded, his bravado deceived no one. Pombal’s dogged pursuit of Malagrida belied the desperate struggle of a man “striken by his own conscience.”  In sum, von Murr reflects: “Pombal, along with his tribunal, abused the dove-like simplicity of that good old man, and at the same time cheated the hopes and desires of a sorrowful and compassionate crowd.”

Certainly, von Murr’s grim account strikes a resoundingly different note from Pombal’s celebratory tenor. In perhaps the most telling difference, Malagrida finds speech in von Murr’s account: “O merciful God! stand by me in this hour, and have mercy upon my soul! Lord, into your hands I commend my spirit!” Pombal’s heretic and criminal has become von Murr’s blameless martyr.

These contrasting accounts reveal an ongoing concern with the Jesuit Order, even in the aftermath of Dominus ac Redemptor, the papal bull that officially dissolved the Society of Jesus in 1773. Pope Clement XIV justified this action with reference to the intrigues that focused upon the Jesuits ­– a deft move that succumbed to but did not vindicate their detractors’ charges – but the debates continued. These disputes kept the memory of the Jesuits alive and their proponents sharp, so that when an opportunity came for its revival in 1815, the Order was able to attract members both old and new, breathing life into the long-suffering Society.

2014 marks the 200th anniversary of the Jesuit Restoration. The Burns Library maintains an extensive collection of materials documenting this critical moment in history. This post continues a series of posts on the Jesuit Suppression: Bold Moves in Tumultuous Times and Satire and Suppression.

To learn more about the Jesuitica Collection at the Burns Library, browse the digitized book and manuscript holdings in the BC Libraries Digital Collections or read about exhibits on the Jesuitica Collection on the websites listed below. If you have further questions or would like to do research in this collection, please contact the Burns Library Reading Room at 617-552-4861 or burnsref@bc.edu.