George Sandys, the Ethnographer: A Man Before His Time

George Sandys was the seventh and youngest son of Edwin Sandys, archbishop of York for the Church of England. Sandys’ Relation was a seminal work at the time, detailing the culture of the Ottoman Empire as well as the ecumenical Christian festivities in Jerusalem for Easter. Sandys was also a poet and noted translator of Classics. His interests in both Classics and poetry contributed to the structure of his writing as did his upbringing in a noted Protestant family. Sandys went on to become treasurer of The Virginia Company and was a member of the council of state and his majesty’s council for Virginia.

The well-educated readers of Sandys’ Relation, nobles and churchmen, would be well acquainted with France and Italy if not from travel then from considerable reading. By beginning his account in Paris and then Venice, Sandys drew in the readers with something familiar. From there on out, the reader would be fixed in a familiar framework and, as such, able to better comprehend the foreign. This mechanism of familiarization is present throughout much of the book, with Sandys using classical allegory and myth as a means of connecting his readers to an otherwise entirely foreign area.

The fold-out map from the beginning of Sandys’ travels is both typical for the time and notable for its idiosyncrasies. Quite naturally the regions travelled by Sandys are expressed in greater detail, but there is something to be said for the gaps in the map, the “silences.” Bastions of Christendom, and the Holy Land, are represented in great detail; regions where Islam is prevalent are sketched in with minimal detail. This is likewise the case for the perceived backwaters of Christendom. The North and East of Europe, spreading into Asia, remains comparatively sparse. Some of the perceived idiosyncrasies are simply matters of convention for the day. The moniker “Part of ____” appears at first to be an insult to the Africans and the Arabians. This, however, is a common usage in contemporary maps of this era, demonstrating a lack of detail on the regions considered beyond the scope of the map’s focus. 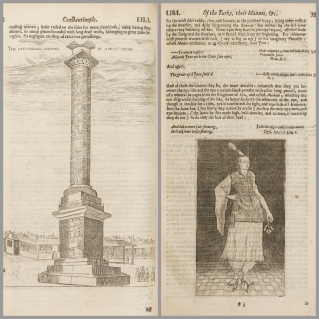 On the left, “Constantinople Pillar” and on the right, “Man in Turkish Dress” from A relation of a journey begun an: Dom: 1610 by George Sandys, 1627, 03-3544 General Collection, John J. Burns Library, Boston College.

The accompanying images aid greatly in the analysis of the map. These brief images provide insight both into what the artist actually saw, as well as what they perceive. The image of the Turkish man is an honest attempt at capturing the perceived exoticism of the “Orient” but also serves as a caricature of sorts. These types of images reinforce, and in some cases establish, the corpus of literature describing the people of Asia and the Middle East.  Likewise, the landscape drawings capture the perceptions of George Sandys.  The details that he chooses to emphasize or de-emphasize give insight into his perception of the relative importance of facets of his journey.

The images and content in this blog post are from the exhibit Ordering the Unknown:  The European Mapping Tradition from 1600 to 1860, which is now on display in the History Department, Stokes 3rd Floor South.    This exhibit was curated and organized by Professor Sylvia Sellers-Garcia’s Spring 2014 Making History Public class, in collaboration with the Boston College University Libraries.