Five grammars and dictionaries published by Jesuits for their fellow missionaries working among the indigenous peoples of Argentina, Chile, and Peru.

The Jesuitica Collection in the Burns Library conserves some of the earliest written records of Amerindian spoken languages. As Jesuits pursued their missionary commitments among the peoples they met, they compiled dictionaries and grammars to help them in their efforts. These reference works not only shed light on Jesuit priorities as they sought to communicate a new religion and its social mandates to Amerindian peoples; they also preserve whole vocabularies saturated with pre-Columbian cultural norms. So while these texts were produced in a moment of colonial encounter, they survive as invaluable treasures of both European and Amerindian ways of thought. 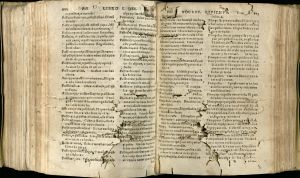 Vocabulario de la lengua general de todo el Peru llamada lengua Qquichua, o del inca (1607). Before this volume arrived into the care of the Burns Library, these pages were damaged by book worms like our very own “Arthur the Theologian.”

These volumes are remarkably diverse, and each has its own story to tell. The last of these holds particular historical interest as the Society of Jesus celebrates the bicentennial of its restoration. The text is an introduction to the Mapudungun language by the Catalan Jesuit Andres Febrés, published in 1765 during the early years of the Jesuit suppression. This volume includes a grammar, sample dialogues, and a dictionary of frequent words; a catechism, common prayers, a guide for confessions, and sample sermons in translation; and a comprehensive Spanish–Mapudungun dictionary. But this text is not a timeless document; it is deeply rooted in the circumstances of its production.

Frontispiece for Tesoro de la lengua guarani (1639). The captions around the image read: “Mary, conceived without the sin of original sin,” and “[He] made salvable the nations of the earth, Wis. 1:14.”

Mapudungun, sometimes known as Araucano or Aruacania, is the language of the Mapuche people of central Chile. The Mapuche had doggedly resisted Spanish rule since the first party of conquistadors attempted to impose a colonial presence in 1536. The 1760s were again a time of tension, as the Royal Governor of Chile pressed the Mapuche people to consolidate into cities and the Mapuche people resisted with increasing violence. Meanwhile the Jesuits were themselves on the defensive. Portugal and France had expelled their Jesuits, the Spanish king threatened to do the same, and the Bourbon monarchs were pressing the Pope to dissolve the Order worldwide.

So it was into an atmosphere of Spanish hostility, Jesuit uncertainty, and Mapuche resistance that Andres Febrés published his Mapudungun grammar in Lima in 1765. In one of his most brilliantly crafted passages, Febrés imagines a dialogue between two Mapuche meeting for the first time, ostensibly as an example to teach his Spanish-speaking audience some basic conversational Mapudungun. What he achieved is something else altogether. In a few short lines, the Jesuit Febrés managed to sympathize with the restive Mapuche, censure the secularizing Spaniards seeking to suppress his Order, and justify the Jesuit mission in the Spanish colonies.

This short exchange imagines the world not as it was but as Febrés wished it to be. For a brief moment in 1765, Febrés could imagine a utopia where his fellow Spaniards would forgo their economic depredations and make way for Jesuit works, the liberated Mapuche would encounter the Jesuits by choice and not by coercion, and the Spanish empire as a whole might profit from this new-found peace and build upon the prosperity rather then the exploitation of its peoples. But this was a world that would not come to pass. The Mapuche would enter into open revolt the following year, and a year later, the Spanish king would expel the Jesuit Order from his lands. And as Febrés’s dream faded from memory, a rare copy of his Arte de la lengua general del Reyno de Chile began its long journey from Lima, Peru, to Chestnut Hill, Massachusetts.