Johnson’s Quest to Define a Language

Dictionaries can tell a lot about the history of English and its usage, especially the first truly comprehensive English dictionary, A Dictionary of the English Language, by Samuel Johnson. First published in 1755, Johnson’s dictionary was the foremost English dictionary until the publication of the Oxford English Dictionary over one hundred years later and was – as one reviewer called it – “a perpetual Monument of Fame to the Author, an Honour to his own Country in particular, and a general Benefit to the Republic of Letters throughout all Europe.”

Well before Johnson began his work, there had been calls for a large-scale, comprehensive English dictionary from such literary elites as John Dryden, Daniel Defoe, Alexander Pope, and Jonathan Swift. These men were calling for the creation of an academy to create a dictionary, like those that produced the comprehensive French and Italian dictionaries of the day, but Johnson determined to take on this colossal endeavor all on his own.

Johnson was uniquely well-suited for the herculean task of assembling a comprehensive dictionary. When he began the project, he was a well-respected, but still largely unknown, writer in London. He needed a large-scale project to provide a steady income and to earn him a wider reputation, and a dictionary seemed the perfect choice. At the same time, Johnson possessed the skills and temperament necessary for the undertaking and had an influential connection in the bookselling trade through his friend Robert Dodsley. It was through this combination of financial need, ability, and connections that Johnson came to answer the call for a comprehensive English dictionary.

Samuel Johnson’s Dictionary of the English Language, PE 1620 .J6 1755 Oversize, John J. Burns Library, Boston College. Johnson’s dictionary was a monumental undertaking that still seems substantial next to the 1970 edition of the Oxford English Dictionary. Unfortunately, the large size of this first edition discouraged the sales that Johnson had hoped would provide him with financial security and establish his reputation.

Johnson commenced with the help of a handful of assistants by compiling quotations to serve as authoritative examples of word usage. In finding quotes, he relied on books in his personal library, pulling from poetry, prose, theology, philosophy, history, politics, philology, art history, and technical works. In 1754, he traveled to Oxford to conduct research for the dictionary’s front matter: the preface, a history of the English language, and a short grammar. He sent sections to his printer, William Strahan, as they were finished, so the dictionary was not printed sequentially. Once Johnson had produced most of his copy, the printing process was quick and efficient—printers set type while he read proofs.

Johnson left a few hidden Easter eggs for careful readers. Here, he illustrates one definition of dull: “Not exhilaterating; not delightful; as, to make dictionaries is dull work.”

When the dictionary was published in April 15, 1755, it consisted of two folio volumes which were bound in paste boards. Wealthy purchasers would then have the book bound in a custom ordered or “bespoke” binding. The new dictionary met with positive reviews and was soon reprinted in a second edition that was sold in installments. Nonetheless, neither of these editions sold particularly well because they were too expensive for many readers, and many found them too cumbersome. In January 1756, the publisher released a two volume octavo abridgement that was cheaper and smaller, which in turn enjoyed healthier sales. 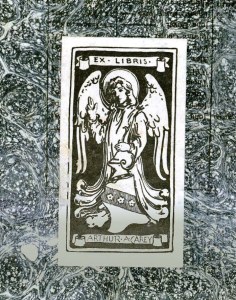 The inside covers of this 1755 first edition of Johnson’s dictionary have a unique history of their own. These pastedowns were recycled from lists naming lieutenants promoted in the British Navy in 1803-1804. This copy later entered the libraries of the famous Astor family and bears the bookplate of Arthur Astor Carey (1857–1923).

The Burns Library at Boston College owns several copies of Johnson’s dictionary, including a first edition from 1755. Published by William Strahan in London, the two-volume folio edition is almost 16 inches long. The books have bespoke leather bindings over the publisher’s boards, although the leather is now flaking off, especially around the edges. Adding to the rich look of these books, the volumes feature designs printed in the front and back covers and marbled endpapers. Each volume contains an old owner’s bookplate bearing the name of one former owner: Arthur A. Carey, who was a descendent of the famous German American businessman John Jacob Astor.

Though Johnson’s dictionary was well-received and eventually popular, he did not enjoy many fruits of his labor. He was arrested for debt less than a year after the release of the first edition. Nonetheless, the physical presence of the book remains a reminder of the monumental accomplishment of this dictionary. The size of the volumes, the length and the number of entries included, and the extensive use of illustrative quotations all illuminate the extraordinary task Johnson undertook. And the Burns Library copy, with its decorated leather binding and marbled endpapers, underscores the importance this title held in the collections of its original owners.

This blog post comes from the Early Printed Books: History and Craft class, which was taught by BC History Professor Virginia Reinburg in Fall 2014.