The Burns Library hosted forty-one class sessions this past semester, including two that met weekly.

Facsimiles of famous early manuscripts from Ireland and England provided a look into the world of the medieval church for students in Professor O’Clabaigh’s class.

Family correspondence in the Hilaire Belloc collection that features letters from his son Louis, who served in WWI and ultimately gave his life, and reports from Europe by American journalist, Mary Boyle O’Reilly on attitudes and conditions in countries at war laid out a poignant field of study for students in Professor Rob Savage’s class on WWI.

Nine other classes met at Burns once; one Fine Arts Class met four times at Burns.

Students in the course, Italian Palaces, taught by Fine Arts Professor, Stephanie Leone, viewed such unique material as Four Individual Prints of the Figures in Bernini’s Fountain (representing the four largest rivers in the world).

Burns Library was very happy to host a class from the School of Theology and Ministry. Professor André Brouillette, S.J. visited with the graduate students taking his course, The Jesuits in the Modern Church: Innovations and Struggles.  This course was designed to explore a history of the Catholic Church through the lens of the worldwide history of the Jesuits from the time of their foundation to the present.  David Richtmyer, Jesuitica Librarian, was thoroughly enthused about this visit and took advantage of the Burns Library’s comprehensive Jesuitica collection to present historic editions of the Spiritual Exercises as well as other texts featuring rules of the Jesuit order, and, at least one text providing first-hand accounts of missionary activity. 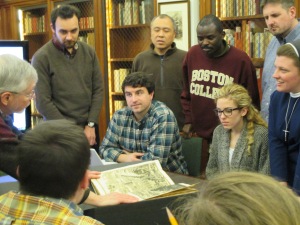 Burns Librarian, Christian Dupont, and other Burns Library staff visited Associate Dean Sean Clarke’s Introduction to Professional Nursing I class to introduce students to the location, purpose and collections of the Burns Library. The students in this class had a specific assignment related to the Burns Library. Books and archival materials related to the history of nursing were ‘on hold’ for several weeks in the Reading Room so that students in the class could complete the assignment based upon examination of selected material. One hundred and fifteen students from the class visited to work on the assignment! 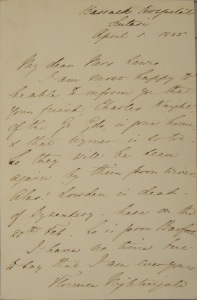 Along with books on the history of nursing, some of the interesting archival materials included Florence Nightingale Letters, 1855 and 1881, and Co-Edition, Boston College School of Nursing student newspaper, 1948-1949.

Professor Tyesha Maddox and students taking the Defining Freedom: Migration, Labor, and Trans-nationalism in Post-Emancipation British Caribbean course enjoyed looking at letters, maps, and one broadside from the Williams Ethnological Collection. Primary sources such as these really helped to put the students in touch with topics and geographical areas related to their study.

Archivist Amy Braitsch hosted a session for students in Dean John J. Burns Capstone class. The students had the opportunity to take a close look into Boston College history by exploring published histories as well as records of various student organizations. Examples of societies and clubs represented in the records included: Chemical Society Records, 1947-1950, the Dramatics Society, and the Fulton Debating Society.

Some of Burns’ most valued and interesting works are related to the study of science. Students in Professor Holly Vandewall’s class Inquiring about Humans and Nature II: Creation, Evolution and Humanity looked at books by Jesuit, Athanasius Kircher the polymath who studied a vast array of topics! Here are just two examples of works displayed for this class (short titles used):

Scrutinium physico-medicum contagiosae luis quae dicitur pestis is a work that reflects Kircher’s status in the scientific community. Because of his vast knowledge and fame as a scientist, Kircher was called upon to assist the physicians in their search for a cure for the bubonic plague that had ravaged Europe for centuries. Armed with the results of his experiments and observations, Kircher wrote the Scrutinium [Scrutiny of Contagious Plague] and published the first edition two years after the outbreak at Rome.

Turris Babel was Kircher’s attempt to reconstruct the specifics surrounding the famous biblical story, recounted in Genesis 10-11, of Nimrod’s attempt to build a tower that reached the heavens. Apart from his interest in ancient civilizations and biblical historicism, the story was of particular interest to Kircher as an account of the origin of languages, and, by Kircher’s extension, of polytheism.

Professors and students alike gave very positive feedback on their experience with the Burns Library staff members, materials and space.  We look forward to providing more instruction, help with assignments and visits in the future!