Philip George Caraman, S.J., Jesuit priest and author, was born in 1911 in London, England, to René André Caraman and Betina Pasqua. Both parents were Armenian Catholics and instilled strong religious beliefs in their nine children; their sons, Philip and John, became priests and two of their daughters became nuns. Despite being a first generation immigrant, Caraman was staunchly British according to his friends and biographers.

Like several of the authors in this series (Anthony Rhodes, Peter Levi, and Graham Greene) Caraman was a traveler and a scholar; he was also born in the 20th century. Rather than being a part of a Catholic revival, these authors all enjoyed a sort of Catholic ascendancy. Writing on the cusp of the Cold War and rising secularism, these authors straddle a fine line between popular and Catholic literature, and many times it is hard to separate the two. They all spent large parts of their lives “on location” researching to better understand the fictional or real subjects their literature. Lastly, all of their works permeate the Catholic values of their upbringing or conversions.  They would all face their own trials and experience moments of success, but ultimately they all faded from public memory. In some ways it is too hard to tell the impact they have had on modern literature because their writing is so recent, and for all of them a contemporary revival is long overdue.

Philip Caraman and his brother John attended Stonyhurst College, a Jesuit institution, in Lancashire. Upon graduation, Philip Caraman joined the Society of Jesus in 1930, six years after his brother. Caraman continued his religious training at Oxford under mentor Father Martin D’Arcy, Master of Campion Hall. With D’Arcy’s guidance, Caraman made connections with influential Catholic writers, including Laura and Evelyn Waugh, Graham Greene, and Edith Sitwell.

Caraman was ordained a priest at the church of the Immaculate Conception in Mayfair in 1945. After his ordination, Caraman joined the “House of Writers” at the Jesuit community on Farm Street in Mayfair. Soon after he became the editor of the Jesuit’s struggling periodical, The Month. With the help of writers such as Waugh and Graham Greene, Caraman was able to breathe new life into the periodical, transforming it into a prominent magazine.

In 1951 Caraman published a translation of John Gerard, the first of several Catholic biographies that he would publish in his lifetime. Caraman continued to write about historically influential Catholics, publishing: William Weston: The Autobiography of An Elizabethan (1955); Henry Morse: Priest of the Plague (1957); The Other Face: Catholic Life under Elizabeth I (1960), stories about Elizabethan Catholic life; and Henry Garnet and the Gunpowder Plot (1961), detailing Garnet’s involvement in the plot against King James I and his later imprisonment and execution. These biographies earned him the title of Fellow of the Royal Society of Literature in 1956. 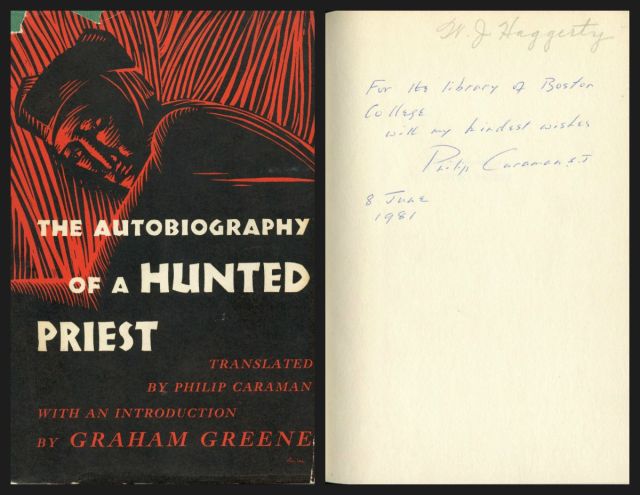 During the 1950s, Caraman’s influence helped to convert several famous Catholics including Muriel Spark and Edith Sitwell. He would later influence actor Alec Guinness to convert to Catholicism.

In 1959 Caraman was appointed vice-postulator of the cause for canonization of the 40 martyrs of England and Wales, Catholics who were executed for treason during the reformation between 1535 and 1679. This responsibility appealed to his religious and historical sensibilities, and he pursued the task with enthusiastic devotion and an elegant pen. The martyrs were eventually canonized on 25 October 1970 by Pope Paul VI.

Following his dismissal as editor of The Month in 1963, Caraman continued his work on the martyrs in earnest for the next couple of years. Then, after the ordination of John Gran as the first Norwegian-born bishop of Oslo in the early 1960s, Caraman moved to Norway to work with Gran as chaplain to the English-speaking population. His interest in Gran and Norwegian Catholicism most likely stemmed from the suppression of Norwegian Catholics in the largely Lutheran country; Caraman could relate to their plight due to the long-time discrimination of Catholics in England. While there, Caraman completed The Years of Siege, a continuation of the story of Catholics in England, and his biography of Father C. C. Martindale.

Caraman traveled between London and a variety of Scandinavian countries in the 1960s, inspiring his novels Norway (1969) and Sweden (unpublished). In the early 1970s, Caraman went to Africa with his brother John and later the two visited South America. His travels through South America, especially Argentina and Paraguay, inspired the novel The Lost Paradise (1975) and the 1985 follow-up, The Lost Empire. These novels would later inspire the 1986 film The Mission starring Robert De Niro. In 1976 Caraman returned to Oslo for a three-year appointment at St. Olav’s in Tønsberg, Norway. Although he enjoyed the Norwegian summers and his friendship with Bishop Gran, Caraman was unable to endure another winter and returned to England at age 70.

After returning home, Caraman made frequent trips to Rome, contributed to the Encyclopedia of the Jesuits, and worked at small parishes. In 1990, Caraman published: Ignatius of Loyola: a biography of the founder of the Jesuits, and later The Western Rising (1994), an account of sixteenth-century Catholic uprisings. His last work Meditations for Tomorrow(1998) was published posthumously. Philip Caraman, S.J., died on May 6, 1998, at the age of 86. Bishop Mervyn Alexander celebrated his funeral mass which was well attended by his many friends and parishioners.  Both a humble man and priest to the end, Caraman chose the following words from Dies Irae for the inscription on his grave stone:

You who have absolved Mary, And have heard the thief’s prayer, Have also given me hope.