This sampling of correspondence between Hilaire Belloc, notable British author of the twentieth century, and his son Louis, a pilot for the 84th Field Company of the Royal Flying Corps, the antecedent to the Royal Air Force, provides insight into how families of soldiers attempted to maintain a sense of normalcy through communication. Sons and parents exchanges updates about life on the front and events at home. Even through the uncertainty of war, Louis always made an effort to share updates, drawings, and well-wishes to his family. Throughout the course of these exchanges, the love shown between father and son remained clear.

In spite of the distance between the two, Hilaire still upbraids his son for removing a book from his private study without permission. This seemingly normal correspondence between Hilaire and Louis almost makes one forget that there was a war going on. In becoming upset with his son over a more trivial matter, Hilaire was trying to restore a sense of normalcy to their lives.

Louis used sketches to illustrate the destruction he encountered on a daily basis that he felt words could not describe. The scorched earth policy practiced by the Germans left entire French and Belgian Villages in devastation, as Louis here encountered on October 4, 1917.

In this letter, Louis sketched his living quarters for his brother. Officers enjoyed better conditions than those men in the lower ranks. 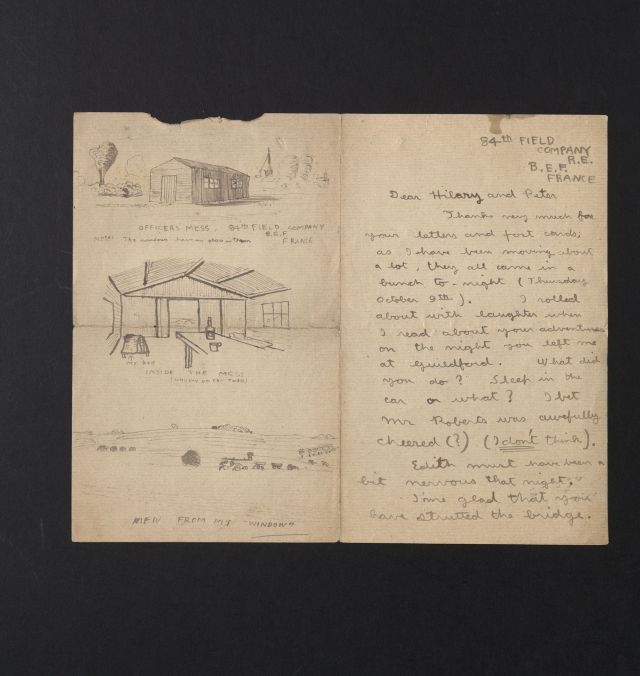 Louis went missing on August 26, 1918, but his death was not confirmed to his family until much later. Here, Hilaire writes in desperation to the War Office looking for a definitive answer because he cannot settle his son’s estate until his death is confirmed. It is very evident in the letter that he is frustrated by this lack of closure both from a practical and personal standpoint.

A comrade of Louis’s, J.G. Schon wrote this letter four years later to Hilaire Belloc “in the vague but slight hope that he might be alive.” He had never heard any confirmation of Louis’s whereabouts after he went missing. Schon recounted several of his favorite moments in their time together that he felt illustrated the quality of Louis’s character. Hilaire responded, “It is exceedingly kind of you to have written me as you have. Any news of my son’s whereabouts is, as you may imagine, very dear to me and I feel the utmost gratitude to you for your action.” He confirmed that Louis was last seen flying very low over German lines near the Cambrai Road and that there was no doubt left what happened.” Even with ample time to grieve, it is clear that Hilaire is still deeply touched by the memory of his son.

The images and content in this blog post are from the exhibit Propaganda & the Great War, which is now on display in the History Department, Stokes 3rd Floor South.    This exhibit was curated and organized by Professor Robert Savage’s Spring 2016 Making History Public class, in collaboration with the Boston College University Libraries.