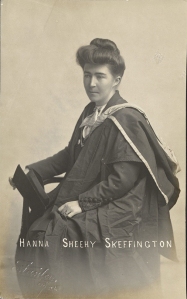 Johanna “Hanna” Sheehy Skeffington, a champion of Irish feminism, an active advanced nationalist, and a socialist, was born in County Cork in 1877. She was the oldest child of  Elizabeth (Bessie) Sheehy and David Sheehy, a mill owner, member of the Irish Republican Brotherhood, and, eventually, nationalist MP (Member of Parliament). In 1887, the family settled  in Dublin, where Hanna attended the Dominican Convent on Eccles Street before leaving  for Europe in 1895 in an effort to recover from early stage tuberculosis. In that same year, Hanna won a scholarship to the Dominican St. Mary’s College. In 1899, she graduated with honors from the Royal University of Ireland, earning a BA in Modern languages and an MA in 1902.

After graduation, Hanna worked part-time as a teacher for the Dominicans on Eccles Street and, in 1903, married Francis (Frank) Skeffington. She and Frank both held strong beliefs about feminism and gender equality, and thus took one another’s last names.

Hanna was active in co-founding the Women Graduates’ and Candidate Graduates’ Association and the Irish Women’s Franchise League (IWFL). In 1912, she was imprisoned with other IWFL women for smashing government building windows. She was also a founding member of  the Irish Women Workers Union.

Hanna and Frank, with fellow suffragist James Cousins, co-founded the feminist newspaper, The Irish Citizen, in May, 1912, and, by 1913, the Sheehy Skeffingtons held sole proprietorship.

Though a nationalist, Hanna did not join  Inghinidhe na hEireann or Cumann na mBan. She believed that nationalist women were relegated to a lower position than men in the movement, and thought that the fight for the vote was of utmost importance. She did, however, support the the leaders of the 1916 Easter Rising, as they had included language about equality for women and men in their Proclamation. On Easter Monday, she delivered food and supplies to those rebels who held the General Post Office, but did not participate in any military activity due to her ardent pacifism.

Frank attempted to organize a militia to stop looting during the Rising, but was arrested and executed without trial. Shortly thereafter, Hanna toured the United States to raise awareness of the situation in Ireland. Due to her well-known activism, she was able to secure a meeting with President Woodrow Wilson and impress upon him the need for Irish independence. A version of a major speech she gave was published in New York under the title British Militarism as I Have Known It and the publication was banned in the United Kingdom.

Like many other activist women featured in the Irish Women Rising series of blog posts, Hanna remained politically active despite the hardship of losing her husband during  the Rising. Hanna became a member of the political party Sinn Féin in 1918, and successfully ran for office in 1920. She served on  the Dublin Corporation (now Dublin City Council), and aligned herself with Éamon de Valera in opposing the Anglo-Irish treaty. She later criticized his policies for restricting women’s rights and freedoms.

Hanna never received a pension, supported herself through teaching and writing, and continued her activism and journalism until she died in 1946.