One aspect of Boston College’s Robsham Theater Arts Center stands out above the rest: its windows. The lure of its elongated mirrors is too great to resist, reflecting both banners of previous productions and the people who walk by the building. Windows like these are built to display the surroundings and to broadcast the breadth of BC dramatic arts from the interior.

These windows have not always boasted years of dramatic success. Robsham and the BC Theatre Department are relatively new, with the former not completed until 1981 and the latter absent before 1993. Despite the lack of a theatre department, BC has had a strong dramatic tradition since its early days. Fortunately, we can trace its history through the programs and other materials held in the University Archives at the Burns Library.

Without a theatre department, the dramatic arts were in the custody of passionate students who established the Dramatics Society (DS) two years after Boston College opened in 1864. DS was the theater-producing arm of BC for nearly 130 years. At its inception, it emphasized classical playwrights, running a single production each year along with annual stage-readings of Shakespeare.

Because BC was an all-male institution back then, female roles posed a tricky problem. Interestingly enough, DS decided that rather than have males play female roles, they would simply omit the female characters. While this was a convenient solution that worked for almost 50 years, Macbeth is a very different story without the overwhelming dominance of Lady Macbeth. 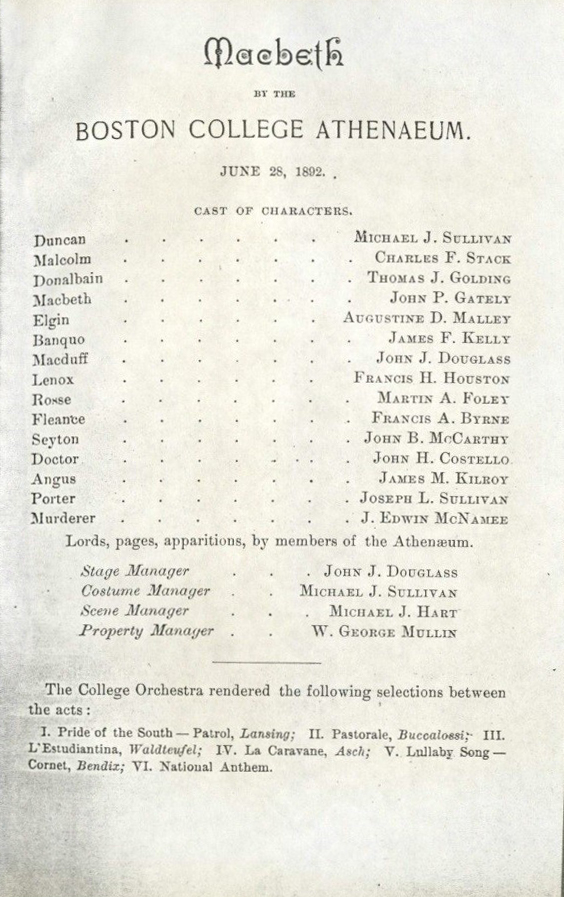 As BC theater evolved into more complex productions, the programs become thicker, more informative, and increasingly professional. Indeed, the programs of the early 1900s could be mistaken for those of a much longer established theatre company.

It is around this time that women were introduced into the scene. Although DS still performed with a male-only cast until the mid-1900s (with males finally starting to play female characters in 1904), the Boston College Philomatheia Club – Boston College’s female fundraising club – worked with professors and DS to produce musicals. These musicals often had a female lead or an exaggerated number of female characters. BC was not fully coeducational until the 1970s, but women had begun to make their mark on BC through the dramatic arts. 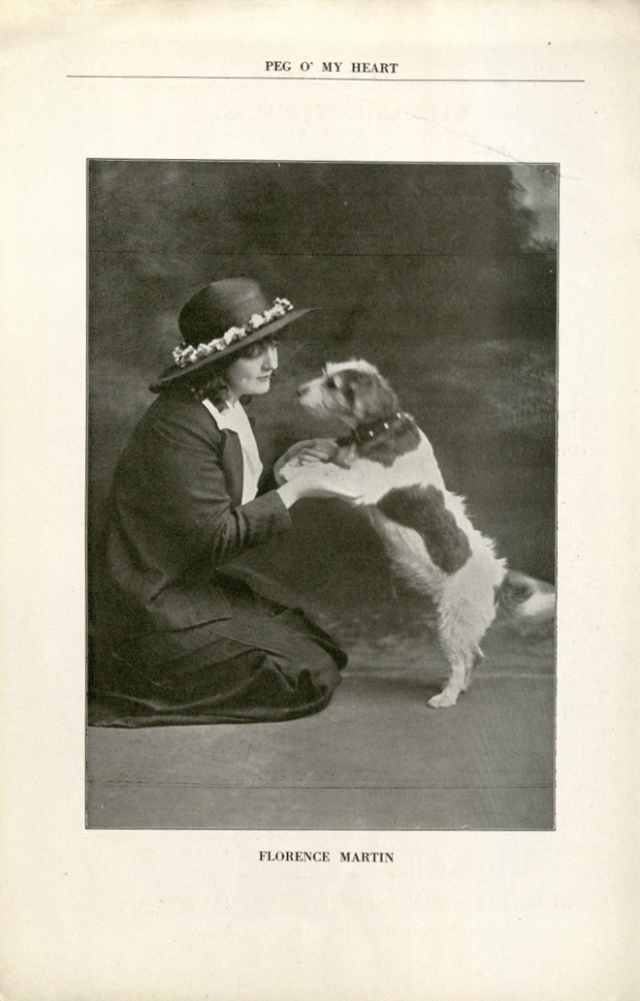 Although interest in campus theatrics declined during and after World War I, it was revitalized in the 1930s by John Louis Bonn, SJ. Bonn acted as both director and moderator of DS for over 20 years, as he oversaw both the individual productions and the everyday operations of the club. His passion for theater carried DS through the hardships of World War II, inspired future celebrities such as Leonard Nimoy and Ed McMahon, and founded the Summer School of Dramatic Arts and other programs. In BC theater, Bonn is a person of legend; the Bonn Studio, a black box theater in the Robsham Theater Arts Center, is named and dedicated in his honor. 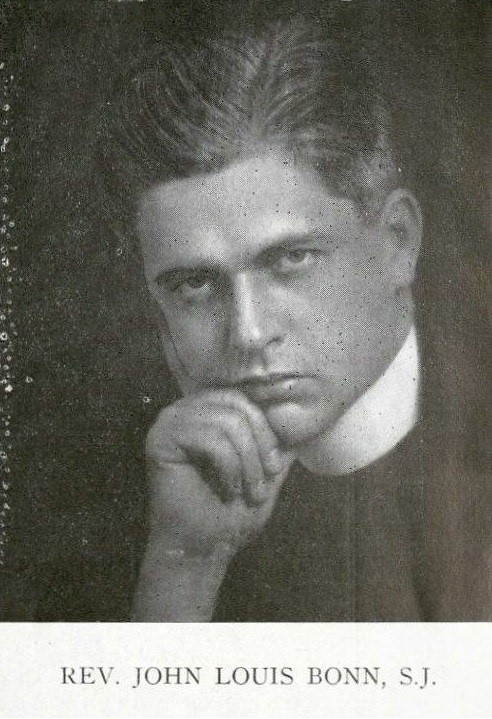 Although Bonn increased the standards of BC theater, BC performers were still without a performance space. DS held their shows anywhere they could. However, the venues – such as Boston’s Repertory Theater or Boston College’s lecture halls and lawn – often left performances cramped or rushed for time.

The need for a theater was great. Luckily, BC had professors Joseph M. Larkin, SJ and J. P. Marcoux to spearhead the campaign for a highly technical, professional theater. Larkin and Marcoux petitioned the administration, designed the entire theater, and solicited funds for its construction. What is now the Robsham Theater Arts Center opened in 1981 after less than 2 years of construction: the dream of over 100 years of theater at Boston College realized.

The front and back of an advertisement for the new Boston College Theater Arts Center. This space was named “Robsham” in 1985 in honor of the deceased son of E. Paul and Joyce Robsham, major benefactors of the Theater’s construction. Student Organizations, Box 1, Folder 27. University Archives, John J. Burns Library, Boston College.

Although BC now had a theater, it still had no independent theatre department. DS was quickly overworked and overrun, as faculty either used DS’s resources or produced plays on their own. During this time of chaos, another student group emerged to fulfill the growing demand for theatrical productions.

The Contemporary Theatre (CT), founded in 1985, complemented the classical productions of DS. DS and CT continue to work with the theatrical population at BC today, with each club producing one play in any genre each semester.

The establishment of the Theatre Department in 1993 came as a great joy for all dramatists of Boston College. Interestingly enough, I could not find any mention of this milestone in the theatre programs themselves. For those dedicated to dramatics, some semblance of a theatre department has always existed, whether through the Dramatic Society, the Contemporary Theatre, or the work of dedicated professors. 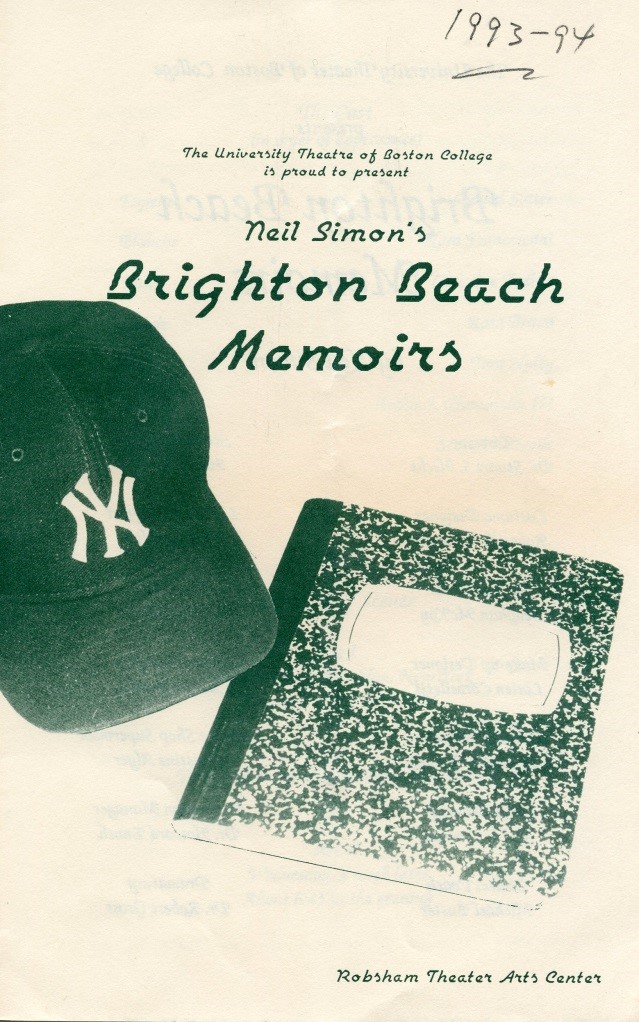 Next time you look into those irresistible Robsham windows, think of the history that lies behind in them. Theater at Boston College was built by over 130 years of passion and continues to promise many outstanding programs to come.