In Part One I looked at the change of heart Congressman Tip O’Neill experienced in 1967 regarding the Vietnam War. Formerly a supporter of the Executive branch’s military policy, O’Neill, encouraged by a stream of constituents’ anti-war letters, shifted to an oppositional stance focused on ending America’s involvement in Southeast Asia. Even after evolving on the issue to align with the majority of his voters, O’Neill continued to receive correspondence from the public as further news from Vietnam influenced public opinion.

The appearance of atrocity reports, particularly the My Lai massacre, was a major turning point in the public’s perception of the war. O’Neill’s Congressional form letter to correspondents writing about the My Lai incident strikes a surprisingly heartfelt tone: “I am afraid we have grown so accustomed to war and its atrocities that we may have become immune to the horror that this represents. If this is not an isolated incident, and there is a great deal of talk that it is not, then we must really worry about our ability to convey to our troops, and our children, a greater sense of morality and a code of ethics.” That “great deal of talk” regarding other atrocities led to the 1970 National Veteran’s Inquiry into US War Crimes. The Citizen’s Commission of Inquiry, which organized the National Veteran’s Inquiry, held 13 hearings in various cities, collecting testimony from eyewitnesses to purported war atrocities, and giving the public a record of the (alleged) crimes being committed, ostensibly, on their behalf.

My Lai itself was indefensible, but the trial of Lt. William Calley, and his sentence to life imprisonment for the murder of 22 Vietnamese civilians, drew sharp criticism. The bulk of the letters O’Neill received regarding Lt. Calley asks for clemency, with some believing he had been pre-judged by the media. “If I still had my uniform I would take it to Washington and throw it in someone’s face,” writes John Terranova. “We let the newspapers print words like massacre, vicious, brutal, murder and so many other things and then they tie it all up to this kid Calley.” Even some apparent “doves,” while expressing opposition to the war itself, took umbrage with the judicial decision, placing blame for the massacre on the war itself: “They are sending immature and ill-trained boys over there,” writes Joan M. Crochet, “teaching and ordering them to kill and then charging them with murder… Who is being charged with murder when the bombing (ordered by the President) kills civilians?” A standout in the archive’s William Calley folder is a green vinyl record, a promotional copy of a song titled “The Battle Hymn of Lieutenant Calley.” Sympathetic to Calley, it was published and mailed directly to Tip O’Neill by country music label Plantation records.

O’Neill may have positioned himself as one of the leading Congressional opponents of the war, but many of his relevant positions remained moderate. In his November 13, 1969 address, he exhibits a tendency to shy away from identifying with the hard-core anti-war left: “The right wing wants to brand every dissenter and every advocate of peace as a traitor; and the left wing says that because of the mistake in Vietnam, the Constitution must be torn up and established society and government destroyed so that a new order can rise from its ashes.” Tip may have overstated the number of anarchists involved in the anti-war movement, but the rhetoric, by distancing him from extremism, leaves open the possibility that he can hedge his stance on particular war-related issues down the line. This he certainly did, particularly regarding the draft, and he sometimes drew ire for it. A May 2, 1971 letter from Walter Simpson summarizes the discontent felt by many on the left for O’Neill’s refusal to take his opposition even further: 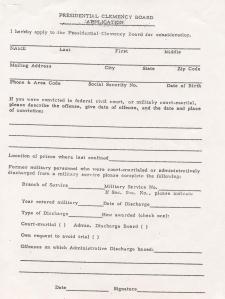 “I saw a film clip of you on the television, the [sic] Advocates. There you were against civil disobedience… You say one thing and do another. You say you are against the war, yet you vote for the draft, and I am under the impression that you also have voted for every military appropriation… Surely it is not to [sic] much to again beg you to become a human being and do everything within you [sic] power to end this war…”

O’Neill’s early stance against clemency (or amnesty) for draft-dodgers also drew input, more notably from both sides of the aisle. A Sgt. James R. Smith sent a curt letter from his station in Oklahoma, saying, “I’m sure your vote on the question of general amnesty will be a resounding No!”  Quite a different stance came from a local student, attending Dartmouth College:

Too late to vote down Vietnam funds. Now go all the way – Amnesty for all patriotic war protestors.

America can no longer afford such divisions.

This card was sent by Mike Capuano, who, as of this writing, is the Representative from Massachusetts’s 7th Congressional District – Tip O’Neill’s former district.

To learn more about the Tip O’Neill papers, please contact the Burns Library Reading Room at 617-552-4861 or burnsref@bc.edu.