Posted on November 5, 2018 by burnslibrary 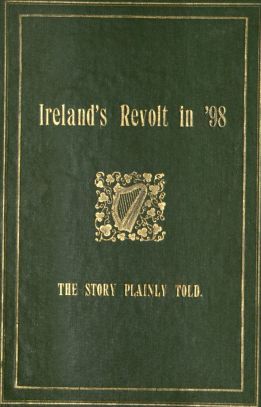 This book was written for the centenary of the 1798 Rebellion. It provides an overview of the 1798 Rebellion, but does so in an interesting fashion—written as if those who participated in the Rebellion are telling the story to young relatives. From Ireland’s Revolt in ’98 by F. Tuite, Burns Library, Boston College.

John Burk, in 1799, noted  that much writing was produced on the 1798 Rebellion before his volume, History of the Late War in Ireland. (Burk, 1799, IV) Burns Library has many sources available on this topic, spanning from the late 18th century to the modern day, including Burk’s work, which provides a contemporary account of the rise of the United Irishmen and the Rebellion itself.  Joseph Stock’s A Narrative of What Passed at Killalla provides further insight into the French connection to the rebellion. Burns Library also holds works on major figures in the 1798 Rebellion, including Wolfe Tone and Henry Joy McCraken. The rise of the United Irishmen, their continuous presence after this conflict, and government documents relating to them can also be researched at Burns Library.

The 1798 Rebellion in Ireland occurred in the Age of Revolution, following the footsteps of the American and French Revolutions. The 1798 Rebellion is also referred to as the United Irish Rebellion, after the group which planned and carried it out. Initially formed by Ulster Presbyterians, the United Irishmen wanted parliamentary reform in Ireland and greater Irish representation within the British parliamentary system, they did not set out to rebel. The United Irishmen wanted to bring Ireland together under a common identity as Irish people, avoiding sectarian religious divides which they believed to be  imagined and imposed by British rule and influence. (Burk, 1799, 37)

Historian John Killen argues that the ideals of the United Irishmen had three main features: first, that men were born free and equal in terms of their inalienable rights; second, the major tenets of these rights were liberty and freedom from oppression; lastly, that Catholic emancipation was necessary to ensure these rights and political sway were guaranteed to ALL Irishmen. (Killen, 1997, 3)  The Protestant Ascendancy, the minority group which held the political power in Ireland, was resistant to the goals of the United Irishmen, seeing both Catholic emancipation and parliamentary reform as threats to their monopoly on political control, a monopoly which was derived from the support and legitimacy it received from the British.

Leadership formed an official plan for an insurrection in July 1797, but decided to delay their plans until the arrival of promised French support. (Burk, 1799, 65). The French had previously tried to aid Ireland with the failed invasion at Bantry Bay in December, 1796. Wolfe Tone, representing the United Irishmen, had negotiated with France for a small fleet to invade Ireland, the idea being that once local Irishmen saw the invasion begin, they would rise up and fight alongside the French.  Due to several factors including lack of following the coordinated plan and bad weather conditions, this attempt at invasion failed. (Burk, 1799, 55-56)

United Irishmen continued to be arrested, including much of the leadership.  Burk claimed, “if all the civil and military officers of the United Irishmen should be arrested in one night, in three days their places would be filled up”. (Burk, 1799, 88) Support for the United Irishmen cause was evident when new leadership polled the counties about rebelling without French aid, and received positive responses. The signal to begin the rebellion was to be burning mail coaches, but this plan was given up by an informer. (Burk, 1799, 89-90) Despite the lack of an official signal, a rebellion did occur, but it was less coordinated than planned.

While these pikes were found in Scotland and not Ireland, they are from the same time period and provide an example of the weapons most of the rebels in the 1798 Rebellion would have used. From page 198-199 of The First and Second Reports From the Committee of Secrecy of the House of Commons Burns Library, Boston College.

The British had dismantled much of the United Irishmen organization before the outbreak of fighting, so the rebellion was quelled quickly in most areas, the exception being County Wexford. According to one historian, “in no other part of Ireland did the royal troops meet such long and stubborn resistance.” (Tuite, 1898, 36)  The fighting in Wexford was particularly violent, culminating in the battle of Vinegar Hill in June 1798. The rebels held the high ground, but the well-armed English encircled them and a brutal, two hour battle ensued, with rebel forces, generally armed with only pikes and firelocks, taking significant casualties. (Tuite, 1878, 33)

F. Tuite provides a detailed account of the battle and casualty numbers in  Ireland’s Revolt in ’98,which can be found in the Burns Library Irish collection.  The defeat at Vinegar Hill was the last major battle, after which the rebellion devolved into sectarian violence. (Bartlett, 2011).

Expected since May, the French successfully landed in Ireland in September of 1798. 1,000 men with arms and supplies arrived in Ireland under the command of general Humbert.   (Tuite, 1878, 52) The French forces experienced some initial success, but, along with the Irish rebels who joined them, were eventually encircled by a exponentially larger Royal force. The ensuing Battle at Ballinamuck lasted until September 8th, 1798 when French General Humbert surrendered. French combatants were treated as prisoners of war and  permitted to go back to France. The Irish rebels were “given no quarter”, and violent executions followed. (Tuite, 1898, 62)

The consequences of the 1798 Rebellion were severe in terms of loss of life and sectarian violence.  The political result of this rebellion was the Act of Union of 1801, which solidified English rule in Ireland under an official union of the kingdoms.  One historian claims this union officially robbed Ireland of her Parliament. (Tuite, 1898, 101) More on the Act of Union, what it did, and its impact will be the subject of my next post!

Burk, John. History of the Late War in Ireland, with an account of the United Irish Association from the first meeting in Belfast, to the landing of the French at Kilala. Philadelphia: Printed by Frances and Robert Bailey, 1799.