This political cartoon depicts John Bull, the symbol of English national Character, showing Hibernia, representing Ireland, their new home for their happily ever after. Daire Keogh and Kevin Whelan use this image as the cover photo for their edited work.  Their caption explaining the image and this reproduction can be found in the plates in the center of this work. From Acts of Union, Burns Library, Boston College

Historian Kevin Whelan and others argue that the the Act of Union was the end of one era and the beginning of another, a marker of periodization for the study of Ireland. (Whelan, 2001, 13) There are many history books which embrace this, such as J.C. Beckett’s From the Boyne to the Union which discusses Ireland between 1689 and 1801 and Robert Montgomery Martin’s Ireland Before and After the Union with Great Britain.  Burns Library holds many materials relevant to the study of the Act of Union, ranging from modern monographs, to 19th century reflections on the union, to political analysis of its passage such as Geoffrey Bolton’s The Passing of the Irish Act of Union: a Study in Parliamentary Politics.  Burns Library also holds records relating to the Loyal Nationalist Repeal Association, a group founded by Daniel O’Connell in 1841 to push for the dissolution of the union between Britain and Ireland. O’Connell will be a major figure in my next post which will discuss Catholic emancipation in Ireland!

Enacted January 1, 1801, the Act of Union disestablished the Irish parliament and integrated Irish representation into the parliament of the United Kingdom.  This maintained English and Protestant control within Irish politics. This process entailed two acts, one passed by the English parliament, another passed by the Irish parliament.  Ireland had previously received some level of legislative independence in 1782, but Irish bills had to be cleared by the ministry in London and the Lord Lieutenant, the highest English official in Ireland. The Act of Union would change this system by doing away with the Irish parliament altogether, giving the Irish 100 seats in the house of commons and 28 in the house of lords in the new, merged parliament. (History of Parliament Online) Additionally, the Lord Lieutenant would hold local Irish control.  The goal of the union was to reassert English control in Ireland and develop and maintain a strong political, economic, and military partnership between Ireland and England. (Bolton, 1966, 4)

Talk of official union was not a new phenomenon, but the 1798 Rebellion provided the opportunity for further discussion and eventual realization of this union. (Whelan, 2001, 16) Having just lost their American colonies as a result of the American Revolution, the English were keen to maintain their connection to and dominance over Ireland.  The English wanted to bring the Irish government fully under control in part to avoid another armed uprising. For more detail on this rebellion, check out the previous post in this series, The 1798 Rebellion.

The English were not only concerned about further Irish rebellion, but also were afraid of French influence in Ireland and the potential for the French to use Ireland as an avenue for invading England.  This fear would keep Ireland integrated into the United Kingdom for years to come. Indeed the French had attempted to aid the Irish rebels during the 1798 Rebellion so this, combined with France being England’s historic rival for power on continental Europe and during this time across the globe as well, fed the fears that France would use Ireland as a springboard in the future.  Ireland being a launch area for an invasion of England would also be a concern during the World Wars in the twentieth century. 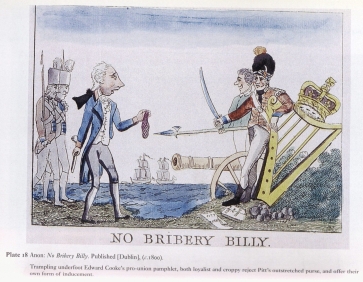 Pitt’s bribes are rejected both by an Englishman and an Irishman in this political cartoon. Reproduced in the plates section of Acts of Union, edited by Daire Keogh and Kevin Whelan, Burns Library, Boston College.

This union was not supported strongly, and so it required us of the political machine to pass it.  Bolton argues the Protestant ascendancy in Ireland was “the pattern of a colonial oligarchy; anxious to defend their supremacy against the more numerous native inhabitants, and suspicious of a home-government on whose protection they depended, but whose interest in their welfare seemed at times lukewarm.”(Bolton, 1966, 2) This means they were leery of giving power to Irish Catholics, the natives, but were also skeptical of full English control.  Irish Catholics would have been wary of a union because the English were their oppressors. It is important however to not lump together all Catholics or all Protestants under one opinion, as this was a polarizing issue and different subsets of these groups would have had differing thoughts. Because it was such a hot button issue, the Act of Union was largely passed through the use of political maneuvering, coercion, and bribes.

Another challenge to the union was the inclusion of Catholic emancipation.  Catholic relief efforts had repealed most of the penal laws (see The Penal Laws blog post for more), but Catholics still did not have the vote and could not hold government positions.

Pitt’s determination to pass the union is illustrated in this political cartoon. From Acts of Union, edited by Daire Keogh and Kevin Whelan, Burns Library, Boston College

The heated debate over this issue highlighted the prejudice against Catholics that was an ingrained feature of both the Irish Protestant Ascendancy and the English government.  William Pitt the younger, Prime Minister of England, put forth that Catholic emancipation would be a sort of quid pro quo to gain Irish Catholic support of the union.  He argued that this was the clearest way to appease Catholics and prevent further rebellion in Ireland.  However, guaranteeing Catholic emancipation through the union made it an even more polarizing issue. Giving the majority Irish Catholic population  a more active role in government would pacify Catholics, but the Protestant Ascendancy objected because this would potentially topple its monopoly on political power and decision making.  Additionally, George III refused to sign an act which would grant Catholic emancipation.

This political cartoon depicts Pitt’s resignation upon the decision to not include Catholic emancipation with the passage of the Act of Union. From Acts of Union, edited by Daire Keogh and Kevin Whelan, Burns Library, Boston College

In the end Catholics were not emancipated in tandem with the act of union.  Catholics would continue to campaign for political rights, achieving this in 1829, over 20 years after it had been promised.  Having failed to keep his word that emancipation would follow union, Pitt resigned as prime minister of England in 1801.

The Act of Union remained in effect until the Anglo-Irish Treaty of 1921 recognized the southern 26 counties of Ireland as the Free State of Ireland, with the remaining 6 becoming Northern Ireland. The Act of Union is significant to 19th and 20th century Irish history because it did not in actuality settle the debates on Irish independence.  Irish nationalism and independence would be a driving force in these two centuries, leading to conflict, uprising, and eventually civil war. Additionally, Catholic emancipation became a large scale movement in Ireland in the early nineteenth century, which will be the subject of my next post!

Bolton, G.C. The Passing of the Irish Act of Union: A Study in Parliamentary Politics. Glasgow: Oxford University Press, 1966.

Keogh, Daire and Kevin Whelan, eds. Acts of Union: The Causes, Contexts, and Consequences of the Act of Union. Dublin: Four Courts Press, 2001.

The History of Parliament Online. “The Union with Ireland, 1800.” https://www.historyofparliamentonline.org/periods/hanoverians/union-ireland-1800