Springtime at Boston College is almost magical. The bitter cold and looming darkness that cast over the winter months melt away into the season of warmth and renewal. The howling winds on the Heights calm to a mild spring breeze that blows with the promise of summer. New life sprouts from the trees lining Linden Lane, the ground gives way to flowers and plants, and students bask in the forgotten sun after a long winter of hibernation. With the arrival of every Spring, we are reminded of the majestic beauty of our University, the architectural uniformity of the buildings, and the landscape that compliments them. Spring also serves as a reminder of those who made our beloved institution what it is today.

This spring will mark the 106th birthday of the staple of our school, Gasson Hall. Later named for its creator, Father Thomas Gasson, the project that became Gasson was one that symbolized new vision and rebirth of Boston College, remembered by many as the “second spring” of Boston College. When Father Gasson announced his visionary plan for the expansion and transformation of Boston College, it was a mere idea, but one that was soon to become a reality that would change this institution forever.

Boston College, from it’s creation in 1863 to its earliest years of the 1900s, was far from the University we know today. At the time, Boston College’s campus was located on Harrison Avenue in Boston’s South End. Its original building housed both preparatory school boys and college male students. During this time, major Jesuit institutions like Georgetown, Santa Clara, as well as Boston College received criticism from its own clergymen about the intermingling of small boys and college students. Such critics claimed that the integration of the preparatory division and college cost these establishments their prestige. As a result, steps towards separating high school from college were moved into fruition.

When Father Gasson crafted his ambitious transformation of Boston College, his plan did not stop at the construction of a company of new buildings. He wanted to rebuild the academic structure of the college as well. His vision included the separation of high school and college, as well as the expansion of the student’s studies from courses in philosophy to ones that also included language and science, research and athletics. He wanted the faculty to extend beyond clergymen, hiring professors in areas of their expertise in scientific and technical training.

In order to make this vision reality, Gasson needed money and resources, and a lot of them. What Father Gasson asked for was a fundraising pool so big that it rivaled fundraising efforts of some of the largest and most well known universities at that time. When Father Gasson laid out his vision of a new Boston College at an alumni reception held in his honor, he asked his alumni to raise $10 million for his plan. Although this goal would never be met during his presidency, it was one that “presented a new scale of aspiration”(1) for the members of Boston College, its alumni, and the community that sought to benefit from the expansive construction and transformation of its future.

Father Gasson’s vision was almost as immense as the great building that came to be. When Gasson’s desired site in Chestnut Hill was bought, our campus was a 30 acre farm bordering the Chestnut Hill Reservoir. The transformation of this small plot of land would be known as Boston College’s “second spring”, symbolizing a new beginning and new vision of Boston College. To us, we know it as Gasson Hall.

In the spring of 1913, four years after breaking ground on the new campus, the first and most acclaimed building was complete. Originally designated the Recitation Building and then the Tower Building, Gasson Hall was eventually named for the man who pioneered Boston College’s transformation. For the graduating senior class of that year, the only students permitted to hold class in the new building, that spring symbolized their transition from college boys to working men. For Father Gasson, it was a spring in which he saw his vast dream of a new campus and a new institution transform into a reality more immense than he could have imagined. And for Boston College, the spring of 1913 was the commencement of a powerful and prestigious legacy that will continue to live on. 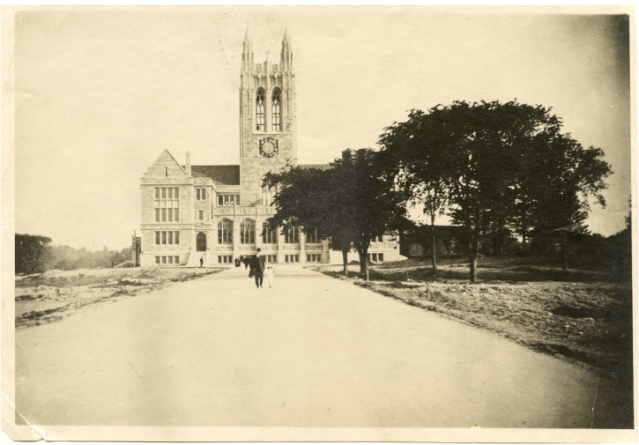 “Take possession of this noble building which has been erected for the greater glory of God, for the spread of Catholic faith, for the cultivation of true knowledge, for the development of genuine science, and for the constant study of those ideals which make for the loftiest civic probity and for the most exalted personal integrity” (Rev. Charles F Donovan).