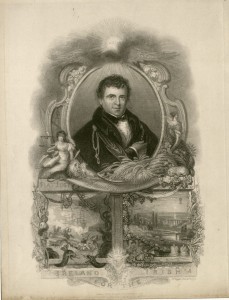 This post focuses on Catholic emancipation in early 19th century Ireland.  Catholic emancipation would remove the final legal restrictions against Catholics, allowing Catholics to serve in government office and vote.  These restrictions were the last vestiges of the Penal Laws imposed on Irish Catholics in the late 17th century to mitigate Catholic power and influence in Ireland. Burns Library holds many monographs focusing on Catholic emancipation itself and Daniel O’Connell, a main figure in the emancipation efforts.  We hold several sets of volumes of O’Connell’s correspondence and speeches as compiled by historians, one of whom, W.J. FitzPatrick, claims that “the secret thoughts and acts of one who played a part so important cannot be without interest to the reader, or value to the historian.” (FitzPatrick 1888, 6) Burns Library also holds a number of original letters written by Daniel O’Connell in the Daniel O’Connell Collection as well as books he owned.

Catholic emancipation had been sought through several avenues at the end of the 18th century.  There had been an effort to include Catholic emancipation in the Act of Union of 1800, but this was rejected due to opposition within parliament as well as by the king himself.  Before that, Catholic emancipation had also been a feature of United Irishmen ideology: to support Irishness as the main unifying identity within Ireland and tear down existing religious divides between Irish Protestants, Catholics, and Dissenters (see The 1798 Rebellion).

How did O’Connell garner and encourage such popular support and participation?  Like modern political campaigning, Catholic emancipation efforts required money, which was generally a barrier to lower class participation in political movements. To combat this issue, O’Connell made the monthly subscription to the Catholic Association only 1 penny, to be collected in the church at the end of mass.  The “Catholic rent” scheme was affordable, allowing more of the Irish population to help the cause and removing the class-based barriers generally attributed to political organizations. It was an effective fundraising tool, and it allowed the cause of Catholic emancipation to become a truly mass movement. Begun in March of 1824, the rent was producing £200 a week by September, rising to £700 a week by December, later rising even higher.  (Gwynn 1928, 222) “They were no longer dependent, as they had been in the old days, upon the leadership of a small group of Catholic gentry, whose social position gave them a certain degree of of immunity from government prosecutions, but whose very privileges were a source of weakness, in making them timid in their demands for the whole people, and in making them more ready to compromise.” (Gwynn 1928, 218-219)

The pressure to pass Catholic emancipation grew stronger when, in the 1828 elections, O’Connell ran for and won a seat in the British House of Commons for County Clare.  To take his seat, O’Connell was required to take Oath of Supremacy, rejecting the authority of the Catholic church in favor of allegiance only to the English monarch. Robert Peel, the Prime Minister of the United Kingdom, knew that O’Connell being prevented from taking his seat would cause further unrest in Ireland and feared it would lead to another rebellion.  Peel had previously voiced his opposition to Catholic emancipation, but had to change his tune when confronted with this new situation.

Catholic emancipation was passed with the Roman Catholic Relief Act of 1829, which removed sanctions on who could hold government positions and vote. This act allowed Catholics more access to political power and agency, but was still controversial and not universally accepted.  Additionally, the minimum property qualification for voters increased from 40 shillings to £10, meaning that while Catholic emancipation had developed into a popular movement, the legislation as passed only benefited the merchants and elites.