During a review of recently-digitized audio in John J. Burns Library’s Joe Lamont Irish Music Recordings, we asked our friend and former BC colleague Séamus Connolly to listen to a fiddle segment on tape reel #6 that Joe Lamont’s tracklist identifies as Michael Coleman performing the tune “Collier’s.”

Michael Coleman (1891-1945) was one of the 20th century’s best-known performers of Irish traditional instrumental music. Connolly, an All-Ireland fiddle champion who cites Coleman as a major influence, was delighted to hear this version of “Collier’s.” Since Coleman’s rendition of this dance tune is not found in published discographies or compilations, it seems likely that Lamont had dubbed Coleman’s playing of “Collier’s” from an unpublished—possibly homemade—78-rpm disc. It is preceded by another reel, “Ownie Davis’.”

We invite you to listen to the set of reels here. Example #1 below is the original version digitized from open-reel tape. In example #2, the digitized version has been adjusted to a slightly slower pitch and speed. 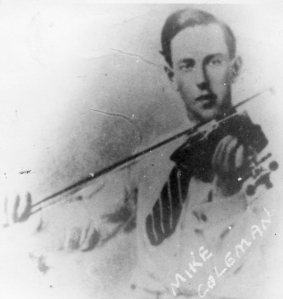 Coleman learned traditional fiddle and dance in the district of Killavil, a rural part of south County Sligo renowned for music. He left Ireland in 1914, settling in New York just before U.S. recording companies began to focus on the Irish American market. According to the Coleman Irish Music Centre, he made circa 80 commercial recordings (40 two-sided discs) between 1921 and 1936.

Both Coleman and Joe Lamont played traditional Irish fiddle, and both lived in the Bronx. Lamont arrived in New York from County Derry in 1926. He became active in music clubs throughout New York City such as the Paddy Killoran Irish Music Club.

Boston College Libraries digitized and described the collection as part of a Recordings at Risk digitization grant project. To hear more audio from selected reels, visit the latest blog posts from the Lamont collection.

We would like to thank former Sullivan Artist-in-Residence Séamus Connolly, as well as accordionist Daithí Gormley, for generously sharing observations and insights about this material while visiting Boston College. We thank Dan Neely and Jimmy Keane for identifying “Ownie Davis.” If you have information to share, a correction to suggest, or would like to inquire about access to collections, we invite you to contact us.