History of the Azores, or Western Islands

Posted on November 4, 2019 by burnslibrary

Frontispiece, History of the Azores, DP702.A86 A88 WILLIAMS

You don’t see many books on the Azores in Burns Library, so having traveled to the volcanic islands myself, once in 1995 and once in 2010, this particular book immediately caught my eye. I found it was a fascinating look at the state of the islands 200 years before I visited. It was remarkable to see how some aspects of the islands remain almost the same as they were two centuries ago, such as the caldeiras (more on that topic below).

In 1810, on his way home from South America, Irish writer Thomas Ashe spent time on the Azorean archipelago. While in the Azores, Ashe wrote a series of letters to the Earl of Moira, Francis Rawdon-Hastings. The Earl, an important figure in British politics, was wounded at the Battle of Bunker Hill, a Major General in the French Revolutionary wars, and was even considered to replace William Pitt the younger in 1797 as Prime Minister. These letters were eventually collected and published in 1813 as a book titled History of the Azores, or Western islands; containing an account of the government, laws, and religion, the manners, ceremonies, and character of the inhabitants: and demonstrating the importance of these valuable islands to the British Empire.

Map showing the relative position of the Azores to North America, Europe, and Africa, History of the Azores, DP702.A86 A88 WILLIAMS

Thomas Ashe’s goal in writing these letters was to convince the Earl of Moira, and therefore the British government, to obtain the Azores. In letter III Ashe reminds the Earl that Portugal owes Britain large sums of money due to the support of Britain during the Peninsular War, which lasted from 1807-1814. The Portuguese could easily erase that debt by transferring sovereignty of the Azores. Ashe lays out further reasons for acquiring the nine Azorean Islands in letter IV. His first reason is that the Azores, situated between America, Africa and Europe, would make an excellent port for trading with the rest of the world. Second, Ashe argues that Britain needs a colony that can produce wine, which the Azores is perfect for. The third argument is that the Azores would make an excellent military depot for soldiers before they traveled to Africa or the West Indies in order that a soldier’s “blood may be prepared to meet the vicissitudes of those destructive climates.” Ashe further argues that the islands add another military advantage by allowing Britain to deploy troops from there, rather than directly from Great Britain. This would allow troops to reach the Cape of Good Hope and the East and West Indies more quickly. Ashe also suggests that instead of sending prisoners to the colony of New South Wales (Australia), convicts could be sent to the Azores where they could help improve the infrastructure of the islands. While Ashe’s arguments were ultimately unsuccessful in persuading the Earle and the rest of British parliament, his line of reasoning highlights the British empire’s strategic thinking and concerns of the time. 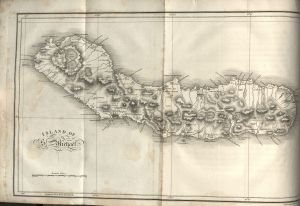 A majority of the remaining letters (32) describe St. Miguel, or St. Michael, the largest of the nine islands. Ashe talks about climate, the inhabitants customs, as well as specific cities, such as Ribiera Grande, Fermoza, and Cete Cetades. One of the most interesting features of St. Michael is the Caldeiras which Ashe describes in letter XVIII. A caldera is a large cauldron-like hollow that forms shortly after the emptying of a magma chamber/reservoir in a volcanic eruption. Ashe described the caldera:

The caldeiras of the Furnas are discoverable by vast columns of boiling water rising from springs of various diameters, and to a height in the greatest degree not exceeding twelve feet. The air is strongly impregnated with sulphur, and the impending atmosphere receives the burning vapor in the form of clouds which exhibit a beautiful variety of eccentric figures and lucid tints. The water is so hot as to boil an egg in two minutes; and beans, potatoes, and corn in a proportionable time, but it is so sulphuric and searching, that it impregnates the vegetable with the sulphurous acid it contains, and therby renders it unfit for the food of man.

View of the Caldeiras, History of the Azores, DP702.A86 A88 WILLIAMS

People today using modern cooking equipment are actually able to prepare meals in the caldeiras by burying  pots in the ground.

One of the main reasons Ashe went into such great detail about the Azorean Islands is because they were relatively unknown to the people of Great Britain. He laments in letter V that other, much smaller and less important islands have been written about extensively, but could not find any information about the Azorean Islands other than their names and location. Ashe even recounts a trip to Lisbon, where he was finally able to find a book titled History of the Azores and was mortified when he discovered that the author was a visionary priest and had clearly never been to the Azores. This makes Ashe’s History of the Azores one of the earliest full descriptions of the islands and an important resource for historians.

Researchers interested in using any of the books in Burns Library are welcome to visit anytime. 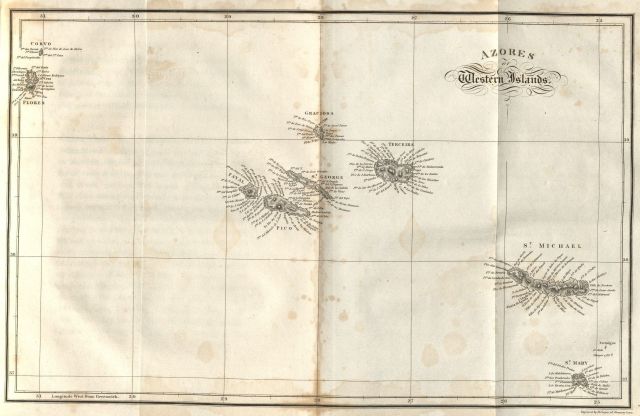