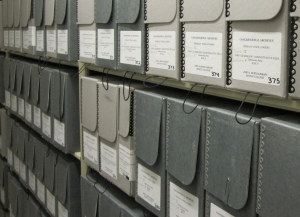 The bulk of the Thomas P. O’Neill, Jr. Congressional Papers are stored in one physical location in fairly uniform boxes at the Burns Library. The collection is accessible to researchers in the Burns Library Reading Room.

As election day closes in on us and the antagonism of the campaign trail intensifies, it is hard to imagine a time of bipartisan cooperation in either personal or political life. Yet the congressional papers of Cambridge politician and Speaker of the House Tip O’Neill provide a glimpse into a world where politicians checked their work and animosities at the door and engaged in collegial personal relationships after hours.

When I started my work as a research assistant for the new Tip O’Neill exhibit to open this Fall, I assumed that my personal interest in Irish American history would predispose me to be primarily interested in Tip’s involvement in Irish foreign affairs. Yet as my project progressed, I found myself continually drawn to those letters and photographs that told a story of bipartisan friendship. The Thomas P. O’Neill Jr. Congressional Papers, held by the Burns Library, contains correspondence, legislation, photographs and other documents that record the Irish pol’s congressional career. A Boston career politician who grew up in a triple-decker in North Cambridge, Tip O’Neill was notable for his steadfast commitment to his local community, his involvement in foreign affairs, and his leading role in the Democratic Party’s battle with the Reagan administration. These papers also reveal bipartisan relationships between Tip and his Republican colleagues, including Ronald Reagan, George H.W. Bush, and Gerald Ford. These were not just cordial working relationships but sincere friendships.

However, this post is not meant to romanticize a type of friendship or working relationship between these men that did not exist. Make no mistake – Tip O’Neill was highly partisan on the House floor. In fact, according to one White House Lobbyist he was “the most partisan congressman” in Washington. He engaged in bitter political fights, challenged his opponents at every turn, and was unafraid to level harsh personal criticism at them. In one such incident on an ABC talk show in 1981, Tip accused Reagan of having “no concern, no regard, no care for the little man of America.” In response, Reagan claimed that Tip used “sheer demagoguery” in politics. The president called Tip the next day to make amends, to which Tip responded, “Old buddy, that’s politics – after 6 o’clock we can be friends, but before 6 it’s politics.” This adage came to exemplify Tip’s outlook on his relationships with Republican opponents: during the work day, they were adversaries; once the clock struck 6 p.m., all bets were off. The bitterness in their political battles did not necessarily survive beyond the House walls.

Ronald Reagan in particular exemplified a political outlook and vision for America that directly contrasted Tip’s. They disagreed on nearly everything – taxes, public programs, government spending. Yet despite their conflicting political views, they did find some common ground to maintain their professional and personal relationship. Their Irish heritage provided much of the basis of their friendship, as they worked together to pass the Anglo-Irish Agreement in 1985 and established the annual St. Patrick’s Day Speaker’s Luncheon at the White house in 1983. Despite their professional differences “before 6 p.m.,” both men have acknowledged that “after 6pm,” they could share a drink or a card game. In Tip’s memoir, Man of the House, he fondly remembered how the president would call him to ask, “Hello, Tip, is it after 6 o’clock yet?” to which Tip would respond, “Absolutely, Mr. President.” Their “watches must have been in sync,” Tip said, as despite their constant conflicts in Congress, they stayed good friends over the years – a friendship documented in numerous photographs and letters housed in this collection. 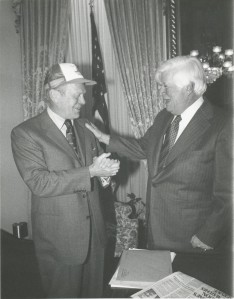 Of all his Republican opponents, Tip O’Neill shared the closest friendship with Gerald Ford. O’Neill and Ford often played golf, as is evident from the many photographs in the collection of the two men at various golf outings. In fact, the pair’s friendly embrace at one golf tournament was widely published in newspapers around the country. O’Neill even supported Ford’s appointment as Vice-President after Spiro Agnew’s resignation. Yet Tip also frequently offered harsh and outspoken criticism of Ford’s political performance during his presidency – to the point that one Ford aide questioned the loyalty of a man who could play golf with a friend one day and severely censure him on national television the next. Ford dismissed his aide’s concern, remarking, “You don’t understand, we’re old adversaries. This is all part of the game.” This understanding of the division between professional and private life was shared by Tip. In a discussion with Ford shortly before his swearing in as Vice President, Tip reflectively noted, “Christ, Jerry, isn’t this a wonderful country? Here we can talk like this and you and I can be friends, and eighteen months from now I’ll be going around the country kicking your ass.” 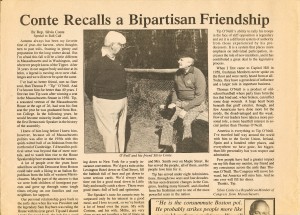 Although O’Neill’s friendships with Ronald Reagan and Gerald Ford are perhaps better known, he was also good friends with other Republican politicians. Massachusetts Republican senator Silvio Conte and Tip had been friends since their early political careers. In their younger years, Conte and Tip often played cards and drank beers, sometimes long into the night during their train rides to and from Washington, D.C. Conte credits their friendly relationship to their shared background as the children of immigrants, and common interests, like good food, card games, and local politics. “We just hit it off,” Conte once remembered, noting “few people have a greater impact on my life than my mentor, my friend and my conscience across the aisle.” Tip also maintained a close friendship with George H.W. Bush. Bush significantly asked Tip to be his ambassador to Ireland immediately following his election to the presidency.

In light of the upcoming election, the subject of animosity in the personal and public exchanges between politicians is a timely one. In 2011, at the annual St. Patrick’s Day Luncheon established by Reagan and O’Neill, President Obama urged for a return to the bipartisan atmosphere created by O’Neill and Reagan – to seek common ground, work together, and perhaps even transfer congenial after-hours friendships to the House and Senate floors. According to President Obama, this was one of Tip’s greatest lessons: “even in the midst of partisanship and passion,” Tip O’Neill proved that “true friendship can exist in this town.”

The Thomas P. O’Neill, Jr. Congressional Papers are available for research in the Burns Library Reading Room. A section of images from the collection is available online. The permanent Tip O’Neill exhibit is installed in the O’Neill Library. “Our Man of the House,” a new exhibit in celebration of Tip’s centennial year, is now on view in the O’Neill Library Reading Room. You can also read another post about Tip O’Neill’s work on the Equal Rights Amendment.  For more information, please call the Burns Library Reading Room at 617-552-4861 or e-mail us at burnsref@bc.edu.