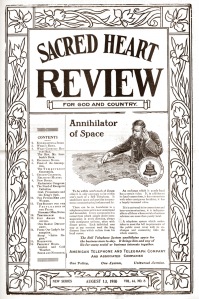 The Sacred Heart Review was a Catholic newspaper published in Cambridge and Boston from 1888 to 1918 devoted to local, national, and international news.  The entire 60-volume run has been digitized and is now available online as part of the Boston College Digital Collections. Many of the articles in this newspaper reported on the Catholic Church in the Archdiocese of Boston as well as greater New England, along with pieces that explicated and defended Catholicism. The statement on the paper’s masthead explains its mission succinctly:

Our object: to furnish sound, instructive, and entertaining reading for the Catholic family; to explain, illustrate, and defend the doctrines, devotion, and practices of the Church.

The first order of business in the digitization process was to inventory the masses of volumes that were delivered to the Burns Library. Since some of these bound volumes turned out to be in three-hole punched loose leaf, the only way to know exactly what we had was to go through each volume, issue-by-issue. The Sacred Heart Review was published as two volumes per year, 26 issues to the volume. Given the number of duplicates we had – in some cases there were five or six duplicates of a particular volume – the job appeared to be a very long and dry exercise in spreadsheet creation. But it was just that “long and dry exercise” that led directly to the Review becoming a completely searchable digitized text.

As I thumbed through each issue of each volume I was drawn into the newspaper’s world – the world of turn-of-the-last-century Boston. Through the newspaper’s advertisements, articles, columns and even printing presentation, I entered a paper time machine that became more and more compelling the more I cataloged. By the time I was finished I had become convinced that this journal would be an ideal addition to the greater digital library; only six libraries nation-wide had holdings of the Review, and of these only three – BC, Library of Congress and Marquette University – had complete holdings.

What did I find that was so compelling? And how would the digitization of this newspaper advance scholarship?  The front pages of the paper always covered current events in both the political and intellectual spheres.  In addition, most issues of the Review devoted at least some space to coverage of events in the Archdiocese of Boston, and some issues were devoted – in part or in whole, in the case of supplements – to reporting the affairs of the Catholic Church throughout greater New England. Since the paper’s period correlates to the rise of what some have called the “golden age of American Catholicism,” it represents an extraordinarily rich resource with which to mine information about this period.  For example:  in vol. 53, no. 3 (Jan. 2, 1915) the cover article contained Pope Benedict XV’s encyclical Ad Beatissimi Apostolorum, which described his grief at the slaughter that had just begun to envelope Europe. Terming the war the “suicide of civilized Europe,” Benedict attempted to mediate between the Allies and the Central Powers, but was rejected by both sides.  Vol. 56, no. 17 (Oct. 7, 1916) saw another front-page article concerning the war, entitled “German-Americans Loyal.” Anti-German sentiment had become high in the country (for example, one man of German descent was lynched in Illinois simply because of his ethnic background, and the jury appointed to try the case described the act as “patriotic”), but the Review strongly defended the patriotism of its German-American parishioners and indeed of German-Americans everywhere. 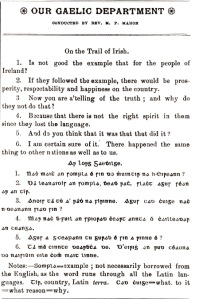 Since many of the subscribers to the newspaper were Irish-Americans, the Review often featured articles and columns dealing with Irish heritage. Advertisements offering inexpensive rates to travel back to Ireland were prominently featured, as were columns dealing with Irish language and culture.  Finally, popular culture is treated in every issue with the many advertisements that brought income to the Review. From the standpoint of both history and cultural studies the Review offers many insights into this period of history.  It is also possible to trace the rise and fall of gas lighting through the advertisements of the Cambridge Gas Light Company. Towards that end the ads attempted to fend off the encroaching dominance of electric lighting by offering very inexpensive rates. 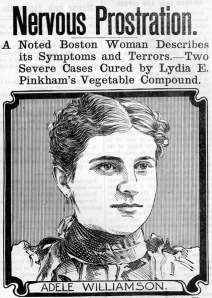 Every issue featured advertisements from local patent medicine manufacturers such as Lydia Pinkham’s Vegetable Compound, Dr. Greene’s Nervura, Father John’s, and Dr. Pierce’s Pleasant Pellets. See for example vol. 24, no. 26 (Dec. 29, 1900) , and especially the full-page ad “A cry for help” purchased by the Lydia E. Pinkham Medicine Co., Lynn, Mass. in vol. 13 (n.s. 1), no. 12 (Mar. 23, 1895).  Most of these firms disappeared or changed the nature of their products after the passage of the Pure Food and Drug Act; for example, Dr. Greene’s was found to contain 18% alcohol, along with ginger, and the owners were fined. Lydia Pinkham’s medicine, aimed at the reduction of menstrual cramps, was actually found to have genuine medicinal properties and the firm is still in business. Songs have been written about Pinkham, and a B-17 bomber in WWII was named “Lydia Pinkham.” The bomber, unfortunately, did not have the same luck as Ms. Pinkham’s customers, and was shot down.  The Review itself advertised that it offered “A First-Class College Education FREE to any boy who sends the Sacred Heart Review offices 100 new subscriptions 4 years of either preparatory (High School) course, or 4 years of college course at Boston College.” Similar offers were made for Holy Cross College and Mt. St. Joseph Academy. See vol. 34, no. 2 (July 8, 1905).

These short descriptions provide but an inkling as to the contents of this incredible resource.  Thanks to the work of Bill Donovan, Betsy Post, Brian Meuse, Naomi Rubin, and Greg Tallent, the Sacred Heart Review can now be viewed, searched and downloaded in either individual issue or complete volume form at newspapers.bc.edu.  The online version was also made possible, in part, by the John and Ruth Galvin Endowed Fund for the Boston Collection at the John J. Burns Library.  If you have further questions or would like to do research in the Boston Collection, please contact the Burns Library Reading Room at 617-552-4861 or burnsref@bc.edu.