Programs, Reactions, and Outcomes to the Irish Women Rising: Gender and Politics in Revolutionary Ireland, 1900-1923 Exhibit at Burns Library

The acquisition of the Loretta Clarke Murray collection, a collection that provides a unique perspective on the Irish nationalist movement through the eyes and words of female activists, lent significant impetus to create an exhibit based on women’s involvement in the revolutionary period, 1900-1923. The Thomas and Kathleen Daly Clarke papers filled in the gaps with strong content on this topic and period.

Items on display reflected issues and events leading up to the Easter Rising of 1916, the ensuing Anglo-Irish War, and the Civil War that took place after the much contested 1921 Treaty with England. Some of the items on display were: a handwritten journal logging events of Easter week in Dublin, two versions of the constitution of Cumann na mBan (Irish Women’s Council), memorabilia from activist groups such as Inghinidhe na hEireann (Daughters of Ireland), and autograph books circulated by women imprisoned during the Civil War. Objects and texts gave viewers the opportunity to see through material objects how events affected the lives of so many. Several brooches—some styled after the Tara brooch, another incorporating a rifle and the abbreviation for Cumann Na mBan—added an opportunity for an intimate reflection of the events, issues, and the organizations that arose during this period of cultural and political activism. A particular highlight was a large and colorful embroidered panel featuring the Four Jewels of Ireland that was designed and executed by Maud Gonne.

We also displayed an original copy of the Proclamation, on loan from The Irish National Famine Museum in Strokestown, Ireland, thanks to support from the Irish Heritage Trust.

Two events held in conjunction with the exhibit offered enhanced opportunities for understanding, adding threads of knowledge to weave a greater understanding around and through the objects on display. On November 18, collector Loretta Clarke Murray visited and was on hand for a reception co-sponsored by Burns Library and The Eire Society of Boston (below, left). The evening’s discussion, facilitated by Burns Visiting Scholar Louis de Paor and BC English professor Joe Nugent, focused on the continuing importance of the Irish language. On February 3, Lucy McDiarmid (below, right), the Marie Frazee-Baldassarre Professor of English at Montclair State University, gave a talk titled “Fairies, Rebels, and the Boundaries of the House in 1916” based on her award-winning study At Home in the Revolution: What Women Said and Did in 1916.

Burns Library has continued to reach out to interested audiences by highlighting six of the leading women of the Irish Rebellion in a series of entries on the John J. Burns Library blog. Posts have allowed us to provide more extensive information about these extraordinary women than could be contained in the exhibits panels and to reach those who cannot visit in person. These entries will also remain as an online reminder of the physical exhibit and act as advertisement for Burns Library’s Irish holdings.

The exhibit also offered students the opportunity to gain further insight into the time in Ireland’s history. At least seven classes visited the exhibit. Feedback from students and other visitors has been rich and varied.

Katherine Oksen, Burns Library student conservation assistant, helped to create mounts for items in the exhibit. Oksen wrote a blog post about her work creating supports and handling the pieces of jewelry in preparation of the exhibit, and commented:

“The opportunity to be able to work on the Irish Women Rising Exhibit was rewarding in that it took elements of events that I had been learning about in my history class and expanded on it, while simultaneously zeroing in on the people my textbooks have tended to ignore. While it would be naive to declare that I can understand exactly what these women went through, I was given a fresh set of stories and materials to at least try to. I really loved having my work and my studies complement each other.”

Catherine McKenna, the Margaret Brooks Robinson Professor of Celtic Languages and Literatures at Harvard University and department chair, brought students from her “Ireland Rising” course to see the exhibit and remarked:

“[They] couldn’t stop talking … about the dozens of interesting things they’d seen and learned. And as for me, it was a revelation—Mollie Gill, Margaret Skinnider, about whom I’d known nothing at all…”

The Boston Irish Reporter and The Heights Newspaper featured reviews of the exhibit.

In addition to showing previously unknown documents and artifacts associated with prominent Irish women activists, the exhibit also brought to light roles played by lesser-known women. It highlighted the significant but often overlooked contributions that hundreds of women made to Irish nationalist movements during the early decades of the twentieth century. Indeed, many members of the public enjoyed sharing compelling stories on how grandmothers, grandaunts, and other relatives participated in some way to foster the nationalist cause in this turbulent period. 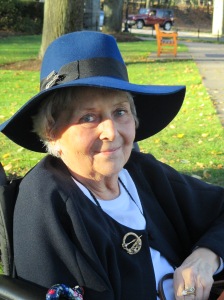 It is with great sadness that we must close our exhibit and blog series with a memorial tribute to our beloved collector, inspiration, and friend, Loretta Clarke Murray, who passed away yesterday as we were composing this posting. May you join in the splendor of eternal freedom the kindred spirits of the Mná na hÉireann – the Women of Ireland – whose brave struggles and strivings gained independence and human rights for your native land. May “Irish Women Rising” be your glory and ever our joyful refrain.

With admiration and affection, the staff of John J. Burns Library