A Room of His Own: Flann O’Brien at Work

It’s common for archival collections to contain the manuscripts and typescripts of writers’ works, as well as notes, galley proofs, and correspondence. These materials can give insight into a writer’s process, the evolution of a written work, and the life of the writer. What is unusual about the recently reprocessed Flann O’Brien papers at Burns Library is that they not only contain this textual evidence of the Irish writer and satirist’s process, but also many of the physical objects that were used in the creation of his works. With this visual documentation of his writing habits, it’s possible to gain unique insight into O’Brien’s creative process. 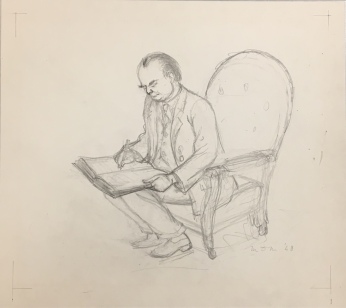 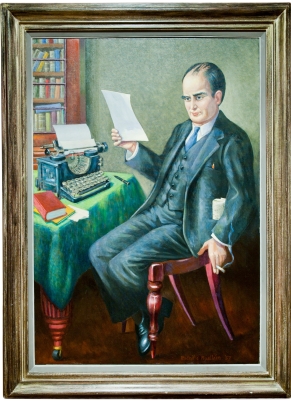 O’Brien wrote three of his novels–At Swim-Two-Birds, The Third Policeman, and An Béal Bocht–while living with and supporting his family with his civil service job following his father’s death. During that time, his younger brother Micheál made numerous sketches of O’Brien working, several of which are contained in the collection. Micheál would later use some of these sketches for his full-color portrait of O’Brien in his office, which hangs in the Irish Room of Burns Library today.

That portrait includes O’Brien’s typewriter, which is also in our collection. O’Brien described his typewriter, in a 1953 letter to Underwood Business Machines Ltd., as “an old briefcase Underwood, which has [had] perfectly satisfactory service for over 20 years, with practically no attention.”(1) He was so fond of his machine that he also wrote to Underwood in 1964, proposing to the company that they make an Irish language typewriter using William Britton and Liam Miller’s Irish typeface, Nua-Rómhánach, a typeface manufactured by Monotype that O’Brien admired.(2)

O’Brien famously wrote At Swim-Two-Birds on his Underwood at a makeshift desk constructed from an old piece of trellis–a legacy he passed on to one of the novel’s main characters, Dermot Trellis. While the Burns Library does not own this famous desk, it does own a wooden side table in which O’Brien stored the manuscript to his second novel, The Third Policeman, for twenty-seven years (the book was published posthumously).

O’Brien also jotted notes and sketches in the margins of his papers and on scratch paper–possibly with this pen! This quote from Pascal was scrawled on the torn cardboard lid of a box, and it later appeared as the opening epigraph of The Hard Life. At the top of the typescript of a teleplay entitled “Flight,” he sketched out a diagram of the first scene’s setting, the “Interior of Aer Lingus plane, cut-away half-section showing one row of seats …”

It can feel difficult to get to know O’Brien fully. He was a complex man who used multiple pseudonyms and lived a sort of double, or even triple, life as a mundane civil servant (Brian O’Nolan), humorist (Myles na gCopaleen), and experimental novelist (Flann O’Brien). This assortment of objects brings texture and meaning to our understanding of O’Brien’s writing life. Many of these materials will be on display in our upcoming exhibit “Genius of Genre: The Pen Names and Personas of Flann O’Brien.” They are also described, along with manuscripts, correspondence, more art by Micheál, and even O’Brien’s hat and coat, in the newly revised finding aid for the Flann O’Brien Papers and, when not on exhibit, are available for research by making an appointment at Burns Library.