Medicine in the Middle Ages: Rare Books in the Burns Library

While working in the library catalog, I set to searching one of my favorite topics, the Medieval period. Trying to narrow the search results, I added the term medicine to see what would come up. There were a number of modern books, though one in particular stood out. It was a book concerning medical thought in the Middle Ages, published in the Middle Ages, titled Marsilius Ficinus Florentinus De triplici vita. (This roughly translates to The Triple Life by Marsilio Ficino of Florence, better known as Three Books on Life.) It was an important work at the time, as it combined his philosophy of Neoplatonism (more on that later), medicine, and astrology. Contained within are three books, each detailing different aspects of health, including methods to increase longevity and how to maintain a healthy body through nourishment of the spiritus (a somewhat ambiguous human feature that relates the physical body to the soul). The work is particularly aimed at scholars, seeing them as distinctly prone to ailments and melancholy, and suggested remedies in astrological changes. 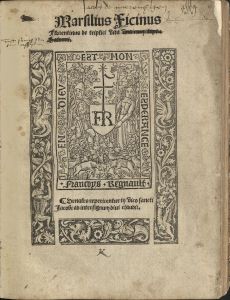 What initially drew my interest to this book was not only the subject but the age. The book is roughly 500 years old, having been published ca. 1510.  This was just a few years after Ficino’s death, meaning the book is likely a second or even third edition. It is a small book, no bigger than a datebook or day planner, and packed with Latin text. The density of the text reveals the scarcity of such books at the time, as no paper is wasted.

Some letters are more intricate and larger to mark the beginnings of new sections, limiting the blank space as much as possible. The text is in a swirling print, meant to mimic handwriting, as most scholars were used to reading such script. It was a fascinating book to view, and one I will likely return to in my research. I may not rely on this particular text overmuch as my Latin is not strong enough to be reading about astrology and medicine, but such a unique primary source can prove invaluable in more than just the words printed on the page.

Now, to return to the aforementioned Neoplatonism, a topic in which Ficino was a prime mover. Like many scholars of his era, the late 15th century, he was a Catholic priest. What set him so apart from his peers was his work with Plato, as he translated all of Plato’s works into Latin, essentially introducing Plato to the contemporary West. While more could be said of his scholarship, one of the most fascinating discoveries made in researching his life is the concept of “platonic love,” which he introduced  to our modern lexicon. This concept, and many others attributed to Plato, resound throughout his works, including De triplici vita. You can find the book by searching the library catalog and view it in person in the Burns reading room.