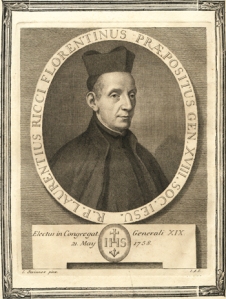 When Lorenzo Ricci was elected the 19th Superior General of the Society of Jesus on May 21, 1758, he may well have approached the post with some hesitation. A biographer later recorded: “Surprised to find himself entrusted with so onerous an office, Ricci earnestly begged his electors to relieve him of this burden; but since he insisted that his shortcomings were the cause of his reluctance, this modesty served only to confirm his election.” Ricci, however, knew a storm was brewing. His predecessor, Aloysius Centurione, had spent much of his brief tenure (1755-57) trying to mollify the insatiable prime minister of Portugal, the Marques de Pombal. Four months after Ricci took office as Superior General in 1758, the King of Portugal narrowly escaped an assassination attempt, and Pombal quickly charged his relentless adversary, the Jesuit Gabriel Malagrida, as a co-conspirator. In January 1759, the Portuguese government proclaimed the Society liable for the attack, and on September 3, the Jesuits were expelled from all Portuguese domains. 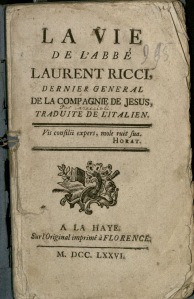 Perhaps the earliest biography of Lorenzo Ricci, this pamphlet (1776) accepted papal justifications for the Jesuit suppression but portrayed Ricci as a victim rather than a perpetrator, BX4705.R53 C3714 1776 Jesuitica Folders.

As Ricci rushed arrangements for the exiled Jesuits then en route to the Papal States, he received notice of another matter just as pressing. The Jesuit procurer in charge of missions in the French West Indies, Antoinne Lavalette, had overreached his credit and defaulted on his debts. As his creditors sued to recover their funds, claims against the Jesuit soared to over 2 million livres. Lavalette couldn’t pay, and his superiors in France refused to underwrite Lavalette’s illicit enterprises. At least one creditor sought to hold the Society accountable for the actions of its officer, and this creditor demanded restitution directly from Ricci. 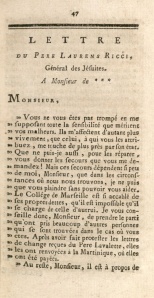 In this letter (1759) republished in a compendium on the Jesuits in France, Lorenzo Ricci refused to reimburse a creditor for debts accrued by Antoine Lavalette, 07-000037625 Jesuitica.

In a letter dated September 26, 1759, Ricci cautiously demurred. Lavalette had exceeded his authority, and all efforts to restrain him had been impeded by the ongoing Seven Years’ War. Although Ricci expressed his sympathies, he concluded: “I can only protest, but it won’t be much help. The College of Marseille is so overwhelmed with its own debts that it is impossible to compound them with the debts of others.” In short, the General Order would not be held accountable for the actions of its provincials, nor would it confirm the responsibility of Lavalette’s superiors in France. Opponents of the Order strongly disagreed. In May of 1761, the French Parlement declared that the French branch of the Society of Jesus would be held accountable for Lavalette’s debts, and they began to seize Jesuit properties. Meanwhile, Pombal’s party in Portugal struck a coup de grâce on September 21, 1761, when Gabriel Malagrida was executed before an Inquisition tribunal in Lisbon. Critics rejoiced in both events, including an anonymous French author, who published a pamphlet of letters purporting to be an exchange between Lorenzo Ricci and Pascquali Paoli, the leader of the insurgent Corsican Republic. 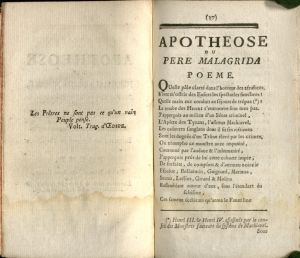 The spurious letter attributed to Ricci begged Paoli to grant asylum to Jesuits still returning from distant Portuguese domains, but its tone quickly betrayed its fabrication. The anonymous author has Ricci dismiss Malagrida’s death: “The scaffold has punished him whom it merits.” And regarding Lavalette, Ricci supposedly wrote: “Dazzled by the splendors of our prosperity, we did not perceive the pit that we had dug ourselves into.” The pamphleteer uses Paoli’s purported response to chastise Ricci and, perhaps more insidiously, to assign Malagrida’s and Lavalette’s incriminating qualities to the Society as a whole: “A band of brigands without faith, without morals, and without anything of worth.” The pamphlet closes with a poem denouncing Malagrida: “the Apostle of Tyrants, that awful Machiavelli.” Against such enemies and faced by such circumstances, Ricci could gain little traction. In 1762, the French government distrained all remaining Jesuit properties, and in 1764, the king formally dissolved the Order. Spain followed suit in 1767, and finally in 1773, the papacy yielded to the pressure of the Catholic monarchs and issued a brief suppressing the Society of Jesus. Ricci was placed under arrest, and he lived his few remaining years imprisoned in the Castel Sant’Angelo in Rome, where he died in 1775. 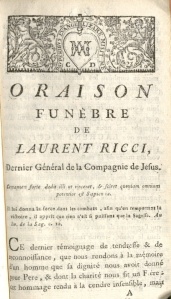 This funeral oration (1776) for Lorenzo Ricci was first read in Breslau, where the Prussian king obstructed promulgation of the Jesuit suppression brief, BX4705. R53 O73 1776 Jesuitica.

Interestingly, the non-Catholic monarchs of Prussia and Russia forbade promulgation of the pope’s brief of suppression, and it was here that Jesuits could still gather to mourn Ricci’s passing. At a memorial service in Breslau (Wrocław), Prussia, the celebrant called Ricci “a man whose dignity has made him as a father to us, and whose charity has made him a brother.” Ricci’s death, far from being a final blow to the Society, gave Jesuits a bittersweet source of consolation: “You have left us, but in your present place in heaven, you will more effectively obtain divine relief for this your company of desolate children.” 2014 marks the 200th anniversary of the Jesuit Restoration. The Burns Library maintains an extensive collection of materials documenting this critical moment in history. This post continues a series of posts on the Jesuit Suppression: Bold Moves in Tumultuous Times, Satire and Suppression, and Memories of Malagrida. To learn more about the Jesuitica Collection at the Burns Library, browse the digitized book and manuscript holdings in the BC Libraries Digital Collections or read about exhibits on the Jesuitica Collection on the websites listed below. If you have further questions or would like to do research in this collection, please contact the Burns Library Reading Room at 617-552-4861 or burnsref@bc.edu.